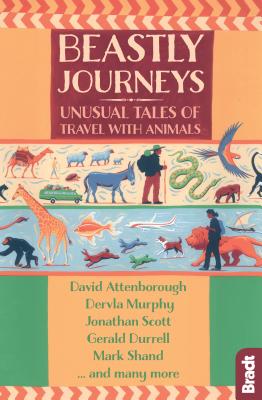 
Special Order—Subject to Availability
David Attenborough, Dion Leonard (Finding Gobi), Dervla Murphy and Brian Jackman are just four of the authors whose work features in this new anthology from Bradt focusing on true stories about travelling with animals. In Beastly Journeys, there are 46 tales of extraordinary animal travel experiences, from hilarious holidays with pets to journeys on which wild animals somehow came along for the ride, including: David Attenborough tries to get an armadillo through Paraguayan customs; adventurer Ash Dykes takes a white cockerel to Maromokotro to ward off evil spirits; Mike Gerrard shares a car journey from Belsize Park to Canvey Island with a python; Brian Jackman rides, walks and swims with Abu the elephant; Bradt New Travel Writer of the Year Dom Tulett rows with a kingfisher; and John Rendall travels to Africa with Christian, the lion he bought at Harrods and raised in west London. Also included is a brand new piece of writing from ultramarathon runner Dion Leonard about his experience with Gobi, the stray dog who accompanied him for 80 miles over the treacherous Tian Shian mountains. A mix of new, previously unpublished writers and old favourites are included, with extracts from writers such as Mark Shand (Travels on my Elephant), Dervla Murphy (Eight Feet in the Andes) and Robert Louis Stevenson (Travels with a Donkey), not to mention Gerald Durrell, 19th-century explorer Isabella Bird and renowned publisher Michael Joseph. Compelling, engaging, surprising, humorous and entertaining... if this book proves one thing it's that travel with animals is every bit as unpredictable as you would expect it to be.
The stories in this book were selected and edited by Hilary Bradt and Jennifer Barclay.The founder of Bradt guides, Hilary Bradt, has travelled with animals, mostly intentionally, for as long as she can remember. An early memory at primary school was being summoned by the head mistress to be shown her coat, hanging with the others in the hallway. It, and the coats belonging to other little girls, were covered in slimy trails ending in happily exploring snails. She had filled her pockets with them at the bus stop. Later, when lecturing on a cruise ship she lost a Madagascan hissing cockroach in her cabin; fortunately it was retrieved before being found by the cleaning staff. A more successful import from Madagascar was Millicent the giant pill millipede who made it to England disguised as a piece of camera equipment and lived for over a year in an aquarium. The Big Journey with an animal, however, was the thousand-mile ride through the west of Ireland, initially with Mollie (described in this book's predecessor, Roam Alone), and then with Peggy recounted in this new book. Now semi-retired, Hilary lives with her two guinea pigs in Devon. Jennifer Barclay is the author of Meeting Mr Kim: Or How I Went to Korea and Learned to Love Kimchi, Falling in Honey: Life and Love on a Greek Island and An Octopus in my Ouzo: Loving Life on a Greek Island. Growing up in a village in the north of England, she has lived and worked in Canada and France, and travelled around New South Wales, Australia, looking after animals from sheep to pythons. A literary agent and editor since the 1990s, she has been involved with books about both travel and animals for over a decade and co-edited the Bradt anthologies The Irresponsible Traveller, To Oldly Go and Roam Alone. She lives on a small island in the Aegean and when not reading or writing can often be found hiking to beaches or taking ferries to other islands while attached to her dog, Lisa. She is always looking for dog-friendly places to stay and despite the name of her blog, has never put an octopus in ouzo.