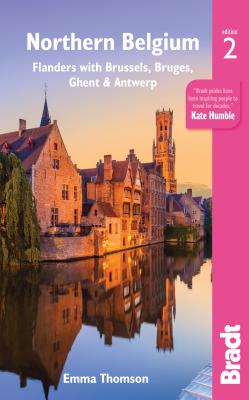 
Special Order—Subject to Availability
This new second edition of Bradt's award-winning Northern Belgium: Flanders with Brussels, Bruges, Ghent & Antwerp remains the only standalone guide to this enticing region, home to more Michelin-starred restaurants per head than France and the largest number of comic-strip cartoonists in the world. Bradt's Northern Belgium provides in-depth coverage of Brussels, including the outer communes that are often overlooked but are home to excellent off-the-beaten track eateries and kooky museums. The guide covers the whole region, from the sandy stretch of North Sea coast, through medieval cloth-spinning cities like Bruges and Ghent, to quaint villages. Features include eyewitness accounts of what it was like living under the control of the Germans during World War II, a rare interview with one of the 29 Cistercian monks at Sint-Sixtus Abbey in Westvleteren who brew the revered Westvleteren Trappist beer, and a guest contribution from Tim Webb, co-author of the best-selling Good Beer Guide: Belgium, who has written the section on the best local tipples and which brewery to visit to try them.Also included is information on the new Brussels Airlines 'Hi Belgium Pass', a nationwide Belgian rail and city pass, a focus on the best Christmas markets of northern Belgium, and details of new WWI information offices and artworks. Restaurant listings have been revised to keep pace with Flanders' dynamic dining scene and there is a new feature on quirky accommodation options and museums, including Brussels' Underpants Museum GardeRobe MannekenPis, showcasing the coolest looks of Brussels's beloved statue Carefully designed walking tours of Brussels city centre are featured, and the guide includes more maps of the area than any other. With festivals forming a major part of Flemish social life, an in-depth list of events is included, from the hip Pukkelpop Tomorrowland festival to the best village f tes. Flanders has one official national park and several nature reserves, and this guide offers more coverage of them than any other.Emma Thomson has lived in the country for nearly a decade and her first edition of this guide won Best Guidebook at the British Guild of Travel Writers Members' Awards.
Emma Thomson is an award-winning travel writer and photographer, who has lived in Belgium for nearly a decade and writes about the country for international newspapers, magazines and publishers (print and online). The first edition of Flanders: The Bradt Travel Guide, won Best Guidebook at the 2012 British Guild of Travel Writer Members' Awards. As a country specialist, she is consulted on everything ranging from where to find the best chips to booking the hippest hotels. She has also presented for Belgian TV show Fans of Flanders and been interviewed by Peter Greenberg Worldwide Radio aboard the Eurostar.