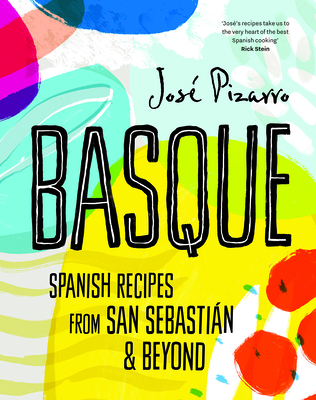 
Not On Our Shelves—Ships in 1-5 Days
If you visit the Basque Country, you will undoubtedly fall in love. Located on the Spanish-French border in Northern Spain, it is home to some of the world's finest restaurants, spectacular modern architecture and dramatic scenery.

In Basque, the leading Spanish chef, José Pizarro, takes readers on a journey around this magical place, taking inspiration from traditional dishes and local ingredients, and adding his own unique twist. From the delicious bite-sized morsels known as pintxos Basque-style tapas to more hearty main meals and sumptuous desserts, José shows you how easy it is to prepare Spanish food at home. The cuisine of this region is wonderful to share with family and friends but it's also about informality and not being a slave to your stove.

Set to the backdrop of the stunning views of San Sebastián and the rest of the Basque Country, Basque is a culinary jaunt around one of Spain's most colorful and exciting destinations.
José Pizarro is an award-winning chef and bestselling author. He worked at Meson de Doña Filo in Madrid before coming to London, where he co-founded the Brindisa restaurants with the Eyre Brothers. He now runs the successful tapas and sherry bar 'José' and restaurant 'Pizarro' in Bermondsey Street and 'José Pizarro' on Broadgate, and a pub called The Swan Inn in Esher. He regularly appears on BBC's Saturday Kitchen and Channel 4's Sunday Brunch. His first book, Seasonal Spanish Food won a Gourmand World Cookbook Award and was nominated for the IACP and Cordon Bleu awards. Basque was one of Observer Food Monthly's 'Books of 2016'.