The Spanish Home Kitchen: Simple, Seasonal Recipes and Memories from My Home (Hardcover) 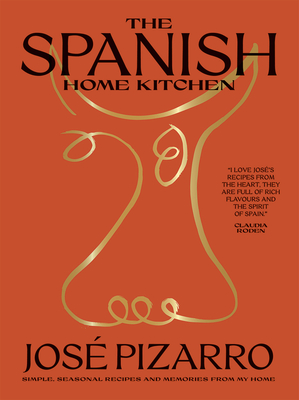 The Spanish Home Kitchen: Simple, Seasonal Recipes and Memories from My Home (Hardcover)


In Stock—Click for Locations
"Full of food that I want to eat, have to cook, and makes me happy just to think about. Quite simply, I love it. I can't see how anyone wouldn't. Frankly, I could cook from this book non-stop." – Nigella Lawson A collection of over 80 best-loved recipes from the heart of chef José Pizarro's Spanish family home. In The Spanish Home Kitchen, José Pizzaro travels back to his mother's house to draw inspiration from the flavors he grew up with, and shares over 80 of his favorite recipes, gathered from all over Spain.

José Pizarro grew up in central-western Spain, in the tiny village of Talaván. His family had been farmers for generations and he spent his childhood on his parents' farm, helping his father produce vegetables, dairy products and different meats. Life in this small village centred on dinner, with great recipes pass from generation to generation through his grandmother, to his mother, and now him.

Recipes include: Shoulder of Iberico Pork in Rich Tomato Sauce with Zesty Couscous; Migas with Fried Egg, Chorizo and Bacon; Seared Squid with Caramelized Fennel and Onions and Lemon and Parsley Dressing; Cherries in Aguardiente Syrup with Pistachio Ice Cream.

From nostalgic childhood favorites that his mother fed the family, to more modern recipes with his Spanish twist, there's a recipe here for everyone.
José Pizarro is an award-winning chef and bestselling author. He worked at Meson de Doña Filo in Madrid before coming to London. He runs the successful tapas and sherry bar José and restaurant Pizarro as well as restaurant José Pizarro, in London, The Swan in Surrey and most recently two restaurants at The Royal Academy of Arts in August 2021. He regularly appears on BBC's Saturday Kitchen and Channel 4's Sunday Brunch. This is his sixth cookbook.
"José Pizarro is feeling nostalgic... lately he’s been reminiscing about life on the farm where he grew up and the food of that time...His sixth cookbook, The Spanish Home Kitchen, is a homage to those memories." -Lauren Taylor, Cyprus Mail

"Tapas isn't just about small plates, it's about sharing those plates with your dining companions. Pizarro's latest book makes you want to share each dish with everyone you know." -Maria Mellor , The Caterer

"From nostalgic childhood favorites that his mother fed the family, to more modern recipes with his Spanish twist, there’s a recipe here for everyone." -Jenny Hartin, Eat Your Books

"Bringing together a mouthwatering celebration of authentic Spanish cuisine, Pizarro’s beautiful volume pays homage to his own culinary heritage, from nostalgic childhood favourites that his mother fed the family, to more modern recipes with his own Spanish twist." - Sheena Bhattessa, Citizen Femme