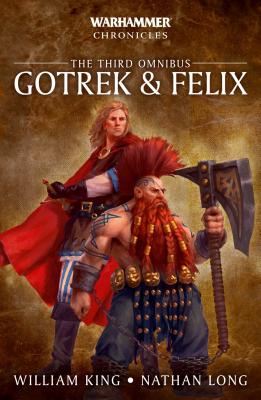 The Slayer and his poet companion – plus a host of friends new and old –follow our stalwart adventurers as they continue their quests in a trio of action-packed novels.

Dragons, a massive Chaos siege and the undead – this omnibus contains some classic villains in some of Gotrek & Felix's best loved adventures – along with one of the most shocking twists in the entire series.

Gotrek and Felix: unsung heroes of the Empire, or nothing more than common thieves and murderers?
The truth perhaps lies somewhere in between, and depends entirely upon whom you ask...
Escaping from a horde of enemies, Gotrek and Felix stumble into a network of ancient magical tunnels and emerge on the mist-shrouded isle of Albion, where old foes are hatching a deadly plan. In the far south, the Slayer aids a dwarf prince against the orcs and goblins who have seized his hold. And when they meet their old friend, the dwarf engineer Malakai Makaisson, the heroes uncover a sinister plot to sabotage a dwarf airship and aid the forces of Chaos in their war with the Empire.
Collecting Giantslayer, Orcslayer and Manslayer, plus a number of bonus short stories, Gotrek & Felix: The Third Omnibus
is packed with fantasy adventure.
Nathan Long hails from Los Angeles, California, where he began his career as a screenwriter in Hollywood. He has written a wide selection of Warhammer fantasy novels, including the Blackhearts trilogy and the adventures of Ulrika the vampire. To many fans, he is best known for his work on the hugely successful Gotrek & Felix series, including five full-length novels and the first Black Library fantasy audio drama, Slayer of the Storm God.