Nuclear Power Policies in Britain: The Quandaries of Neoliberalism (Hardcover) 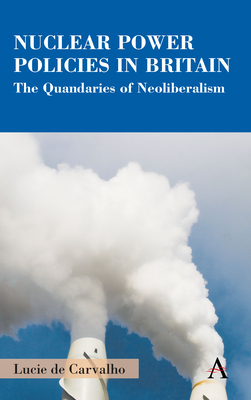 Nuclear Power Policies in Britain: The Quandaries of Neoliberalism (Hardcover)

Over the past decade, the impending environmental crisis has given birth to an international consensus on the need to address climate change, accompanied by a renewed interest in carbon emissions, energy consumption and energy production. Many Western countries are now set to transition towards a low-carbon economic structure. Energy choices have become, now and more than ever, highly critical questions due to their fundamentally political, strategic, geopolitical, economic, social and cultural impacts.

Since the mid-2000s, the British government has been actively involved in reforming the country's energy strategy by encouraging the development of renewables and promoting the revival of the national nuclear industry, which had laid almost dormant until then. Seeing the UK government take back control of its energy strategy represented a rather bold and surprising political move, given the neoliberal dynamics which had spread in the energy sector during the privatisation era of the 1980s and1990s. There are currently about seventy reactors under construction in the world; yet, the British programme is the only one building nuclear reactors (Hinkley Point C) in a liberalised energy market. Consequently, many doubts were raised on the ability of the government to reshape the country's energy mix through the revival of nuclear power, an industry historically blighted by financial difficulties and its controversial legacy.

Nuclear Power Policies in Britain analyses the UK state's capacity to shape energy decision-making using a diverse toolbox of political instruments ranging from legislative, regulatory and communication levers to financial incentives. This case study determines how the current UK public policy on nuclear energy has been debated, legitimised, negotiated and implemented within the constraints of a neoliberal environment. By taking a holistic approach to the nuclear venture, it offers valuable insight on the British approach to energy policy-making and contributes to redefining the country's 'technopolitical regime' in this day and age.

Lucie de Carvalho is a senior lecturer in British Politics and History at the University of Lille, France. Her research focuses on State governance and Britain's energy and environmental policies since 1979.