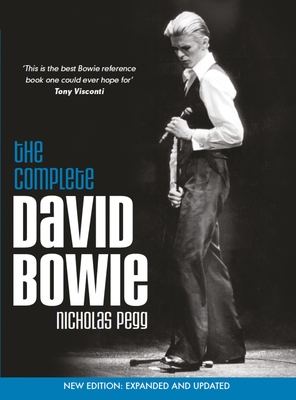 
Not On Our Shelves—Ships in 1-5 Days
The biggest edition yet – expanded and updated with 35,000 words of new material

Critically acclaimed in its previous editions, The Complete David Bowie is widely recognized as the foremost source of analysis and information on every facet of Bowie’s career. The A-Z of songs and the day-by-day dateline are the most complete ever published. From the 11-year-old’s skiffle performance at the 18th Bromley Scouts’ Summer Camp in 1958, to the emergence of the legendary lost album Toy in 2011, to his passing in January 2016, The Complete David Bowie discusses and dissects every last development in rock’s most fascinating career.

* The Albums – detailed production history and analysis of every album from 1967 to the present day.

* The Songs – hundreds of individual entries reveal the facts and anecdotes behind not just the famous recordings, but also the most obscure of unreleased rarities – from ‘Absolute Beginners’ to ‘Ziggy Stardust’, from ‘Abdulmajid’ to ‘Zion’.

* The Tours – set-lists and histories of every live show.

* The Actor – a complete guide to Bowie’s career on stage and screen.

* Plus – the videos, the BBC radio sessions, the paintings, the Internet and much more.
Nicholas Pegg is an actor, theatre director and writer. This book is the culmination of a lifetime’s interest in David Bowie’s work.
“Exhaustively researched and insightfully written. Pegg’s an ideal guide through the Glass Spiderwebs of reference and allusion that comprise the Bowie songbook — 10/10” - Adventures In Poor Taste

“If you are a huge fan of David Bowie and respect the work he did for nearly fifty years, The Complete David Bowie by Nicholas Pegg on Titan Books is perfect for you.” - GamersSphere


“While a number of books have been written about him, it's hard to believe a fan would need more than The Complete David Bowie on their shelf” - Cinema Sentries