Ibn Hamdis the Sicilian: Eulogist for a Falling Homeland (Makers of the Muslim World) (Hardcover) 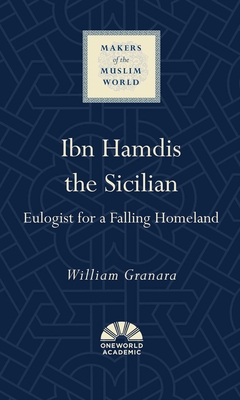 Ibn Hamdis the Sicilian: Eulogist for a Falling Homeland (Makers of the Muslim World) (Hardcover)


Not On Our Shelves—Ships in 1-5 Days
‘Abd al-Jabbar ibn Hamdis (1055–1133) survives as the best-known figure from four centuries of Arab-Islamic civilisation on the island of Sicily. There he grew up in a society enriched by a century of cultural development but whose unity was threatened by competing warlords. After the Normans invaded, he followed many other Muslims in emigrating, first to North Africa and then to Seville, where he began his career as a court poet.

Although he achieved fame and success in his time, Ibn Hamdis was forced to bear witness to sectarian strife among the Muslims of both Sicily and Spain, and the gradual success of the Christian reconquest, including the decline of his beloved homeland. Through his verse, William Granara examines his life and times.
William Granara is Professor of Arabic and Comparative Literature at Harvard University. He was awarded a Walter Channing Cabot Fellowship for his monograph Narrating Muslim Sicily: War and Peace in the Medieval Mediterranean World.
‘An intriguing and original approach that brings together historical events and verses of the Siculo-Arab poet Ibn Hamdis. The author offers a wholehearted evocation of the life of a great human being and the difficult times of wars and political transitions he lived through.’
— Francesca Maria Corrao, Professor of Arabic Language and Culture, LUISS University Rome

‘Erudite and beautifully written… Granara has charmingly translated Ibn Hamdis’s poetry, which is distinguished by novel meanings, a profound lyrical sense of nostalgic longing, and audacious and memorable metaphors… It is a must-read for students of Arabic culture, Mediterranean studies, and medievalists.’
— Maher Jarrar, Professor, American University of Beirut