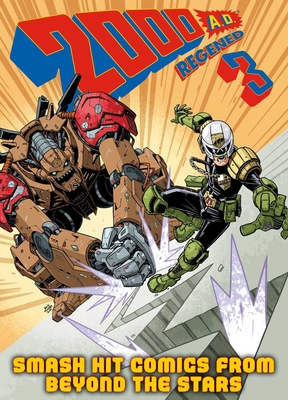 
Not On Our Shelves—Ships in 1-5 Days
The Galaxy's favourite all ages sci-fi spectacular is storming into its third collection!

The critically acclaimed all ages comic from 2000 AD returns!

The galaxy’s favourite thrill-powered science fiction comic is back with another line up of electrifying stories aimed at all ages! Reimagined versions of classic 2000 AD characters like Judge Dredd, star alongside brand new characters, specially created for a younger audience.

In this, the third smashing volume, follow the action packed adventures of Cadet Dredd as he battles robots! Save the world from aliens with Judge Anderson! Meet the mightiest cat burglar of Mega-City One! Marvel at the brain-busting and jaw dropping Future Shocks! Plus, in an exclusive new strip, classic 2000 AD characters the Harlem Heroes return!

Critically acclaimed and beloved by old and new fans alike, 2000 AD Regened storms into its third brilliant collection. Can you handle the awesomeness of 2000 AD Regened?
Arthur Wyatt is a British writer based in the American Pacific Northwest, where he lives with his wife Heather and children Gayle and Verity. He has written extensively for 2000 AD and the Judge Dredd Megazine, including stories set in the Judge Dredd universe, the 2012 move Dredd universe, and beyond. He was also the founding editor of the British small press magazine FutureQuake.

Born in Naples, Italy on the 23rd of August 1983, Davide Tinto is a great fan of comics. After completing his art studies, he started working for Independent Publishers. Thus began his collaborations with Octane Comics, Inteweb Comics, Big Punch Studio, Evil Kat Studio, Cards & Co., Giochi Uniti, Evoluzione Publishing, Reckless Hero, and many others. In 2018 he embarked on his first trip to America and at the New York Comic Con he has the opportunity to meet the editors of the biggest Majors on the market. Thus he began to work first for Rebellion publishing on the 2000 AD magazine (collaboration still active today); then he began his partnership with IDW for which he drew a run on Marvel Action Spiderman (from issue 10 to 12). Also for IDW he drew the Cover of Issue 1 of the new edition of GI Joe and worked on Clone Wars - Battle Tales 4 and on Star Wars Adventures 3 - Kylo Mini Maggs - Fallow and Lead (Issue forthcoming). At the same time he also began working for Valiant Comics on the comic The Visitor. Between the end of 2019 and the beginning of 2020, through Arancia Studio, he is noticed and chosen by Steve Orlando to undertake a collaboration. The project becomes part of the upcoming releases for Image Comics on which the artist is still working.

Michael Carroll is the author of over forty books, including the award-winning New Heroes series of Young Adult superhero novels and the #1 Amazon best-selling cult graphic novel Judge Dredd: Every Empire Falls. He currently writes Proteus Vex and Judge Dredd for 2000 AD and Judge Dredd Megazine. Other works include Jennifer Blood for Dynamite Entertainment, Razorjack for Titan Books (co-written with artist John Higgins), and the Rico Dredd trilogy for Abaddon Books, for whom he has also created the acclaimed JUDGES series which explores the genesis of the world of Judge Dredd. He can be found on www.michaelowencarroll.com

Luke Horsman is an illustrator and comic book artist and has been working in the design and illustration industry for nearly 20 years across a variety of media platforms for 100s of clients, including printed publications, websites and games. Now solely a comic book artist he has done scores of work for multiple clients, independent publishers and authors. He’s also currently working on a creator owned project “Oathbound”, an illustrated saga of Norse tales.

David Baillie is a Scottish writer and artist who works in comics, film and television. As well as various strips for 2000 AD and the Megazine, he also created and wrote the series Red Thorn for Vertigo/DC. He lives in London with his darling wife, mischievous daughter and a multitude of unforgiving deadlines.

Anna Morozova is a Russian-born freelance comics artist and illustrator from Estonia, who now lives and works in Scotland. Following graduation from a Comics Masters in Dundee, she produced work for various comics publishers and commercial clients. As well as co-creating Viva Forever with David Baillie, Anna’s contributions to 2000 AD so far include illustrating Future Shocks and a Black Museum episode for the Judge Dredd Megazine.

Karl Stock has written Tharg's Future Shocks for 2000AD, Dredd prose fiction for the Judge Dredd Megazine and strips including Sniper Elite and Death Wish for Rebellion titles such as Battle, The Vigilant and Cor! & Buster, as well as interviews and features about comics for the Judge Dredd Megazine, Tripwire, Comic Heroes and more. He is the co-author of the 40th anniversary edition of Thrill-Power Overload, 2000AD's official history, and lives in Scotland.

After starting his career as an inker at Marvel UK, Simon Coleby made his debut at 2000 AD in 1989, working on Future Shocks, Universal Soldier & Rogue Trooper. A favourite amongst 2000 AD fans, he has gone on to illustrate Judge Dredd, Low Life and Jaegir. Simon has also produced work for Games Workshop, DC Comics and Vertigo, for whom he co-created The Royals: Masters of War with fellow 2000 AD alumni , Rob Williams.

Liam Johnson is a comics writer and winner of 2000 AD's 2019 Talent Search, whose credits include Future Shocks and Venus Bluegenes (for 2000 AD) and Missing Persons (for Markosia). He also writes for television, including a number of credits for ITV's Emmerdale.

Jake Lynch is a Norfolk based artist drawing mainly for 2000AD, Judge Dredd Megazine and film. A self-taught artist he is living proof that they'll let any idiot in and as a self-confessed Sci-Fi nerd, he is often the first to be asked to leave.

Colin Harvey is a London-based writer working across comics, games, books, audio and Virtual Reality. His work includes the video games Blood and Truth (Sony 2019) and Sniper Elite 4 (Rebellion 2017), as well as tie-in material for Big Finish’s Doctor Who and Highlander ranges. He’s the author of ‘Dead Kelly’, a novella for Abaddon Books’ Afterblight series, and comic stories for 2000AD and Commando. His book Fantastic Transmedia, an analysis of large and small-scale crossmedia storytelling in science fiction and fantasy franchises, was published by Palgrave in 2015.

Tom Newell, 34, is an illustrator, designer and comic artist from the West Midlands, UK. His many influences include Simon Bisley, John Buscema and Sean Gordon Murphy. In 2016 Tom decided to take learning to draw seriously and joined a university comic art course, with the single goal in mind of one day to be a successful comic artist. For the last year Tom has worked closely with UK based comic artist John Charles, on his creator owned project, Technofreak.

Author and comic book writer Cavan Scott is a UK number one bestseller who has written for such popular worlds as Star Wars, Doctor Who, Star Trek, Vikings, Warhammer 40,000 and Sherlock Holmes. He is the author of Star Wars Dooku: Jedi Lost, Judge Dredd: Alternative Facts, The Patchwork Devil, and Cry of the Innocents, and is part of Lucasfilm’s Project Luminous publishing initiative. He has written comics for IDW, Dark Horse, Vertigo, Titan, Legendary, 2000AD, and the Beano.

Paul Davidson is an illustrator and comic book artist from the north east of England. A professional artist for over 25 years working with publishers from around the world. After a brief stint drawing comics in the 90’s Paul spent 9 years as a storyboard/concept artist in the video games industry. In 2008 Marvel lured him back into sequential art, drawing books like The New Mutants and X-Men: Legacy. He’s currently fulfilling a childhood dream of working for the Galaxy’s greatest comic, drawing Judge Dredd.

RAMZEE is what happens to a kid who grows up on a diet of 90’s Image and 2000’s Toonami. Since being nominated for a British Comic Award for his debut indie comic in 2016, he’s gone on to draw illustrations for the BBC & MerkyBooks and write Cat Girl for Rebellion’s 'Tammy & Jinty', ‘FAB’ for StoryWorlds and write & draw his first graphic novel ‘LDN’ for Good Comics.

Korinna is a half Greek/half Singaporean/half Goblin comic artist who is excellent at maths. She’s been self-publishing comics since 2015, including the hilarious webcomic Adventure of Croblin, and had lots of fun working on female-led anthologies Smutcomic and Comic Book Slumber Party. She enjoys walking around to find ugly architecture, catching frogs, and beer
"[2000 AD Regened] genuinely acts as an excellent entry point into the worlds of 2000 AD for the uninitiated." - Broken Frontier

"Something for everyone with a stellar line-up of talent on some of the biggest characters in comics." - The Comics Beat

"The 2000 AD Regened Collection Vol 1. is perfect for younger readers who are getting into the comic medium, or moving on from The Beano and Dandy.” – Geek Culture Reviews

"[2000 AD Regened] genuinely acts as an excellent entry point into the worlds of 2000 AD for the uninitiated." - Broken Frontier

"Something for everyone with a stellar line-up of talent on some of the biggest characters in comics." - The Comics Beat

"The 2000 AD Regened Collection Vol 1. is perfect for younger readers who are getting into the comic medium, or moving on from The Beano and Dandy.” – Geek Culture Reviews

PRAISE FOR 2000 AD REGENED VOLUME 2:
"The joy of Regened is that it’s a proper all-ages thing, something for young and old" - Comicon.com

"Ramzee’s writing is super-tight and perfectly pitched, giving us the whole back-story and setting things up for the future (and I damn well hope there will be a future for this new Harlem Heroes) and, of course, making sure there’s plenty of exciting Aeroball action going off as well. And as for Korinna Mei Veropoulou’s artwork, it’s dazzling, wonderfully lively, absolutely nothing like what’s gone before." - Comicon

"Different, inventive, and a whole lot of fun." - Comicon