The New Spirit of Capitalism (Paperback) 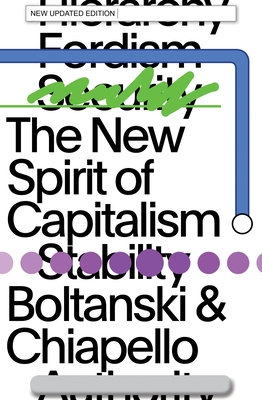 The New Spirit of Capitalism (Paperback)

In this established classic, sociologists Luc Boltanski and Eve Chiapello get to the heart of contemporary capitalism. Delving deep into the latest management texts informing the thinking of employers, the authors trace the contours of a new spirit of capitalism. They argue that beginning in the mid-1970s, capitalism abandoned the hierarchical Fordist work structure and developed a new network-based form of organization founded on employee initiative and autonomy in the workplace—a putative freedom bought at the cost of material and psychological security. This was a spirit in tune with the libertarian and romantic currents of the period (as epitomized by dressed-down, cool capitalists such as Bill Gates and Ben and Jerry) and, as the authors argue, a more successful, pernicious, and subtle form of exploitation.

In this new edition, the authors reflect on the reception of the book and the debates it has stimulated.

Luc Boltanski teaches sociology at the EHESS, Paris. He is the author of numerous books, including The Making of a Class and The New Spirit of Capitalism.

Eve Chiapello is an associate professor at the HEC School of Management, Paris. She is the author of Artistes versus Managers.

Gregory Elliott is a member of the editorial collective of Radical Philosophy and author of Althusser: The Detour of Theory and Labourism and the English Genius: The Strange Decay of Labour England?.
“This massive book is an astonishing combination—an ideological and cultural analysis, a socio-historical narrative, an essay in political economy, and a bold piece of engaged advocacy … a dizzying theoretical tour.”
—New Left Review

“A major contribution to the literature in the field and to scholars beyond French borders.”
—Times Higher Education

“A wide-ranging, nuanced sociological inquiry into the nature of contemporary work.”
—Choice

“[A] vast and ambitious work, which is inscribed in a great tradition of theoretical and critical sociology.”
—Le Monde

“This magnificent book [is] the sociology of a whole generation which capitalism caught on the wrong foot. In more than 800 pages which one devours like a great novel, the book furnishes new weapons for the renewal of the Left.”
—Libération

“This book will no doubt come to be regarded as a contemporary classic of political economy and political sociology.”
—Political Studies Review

“A wonderful book.”
—William Davies, author of The Happiness Industry