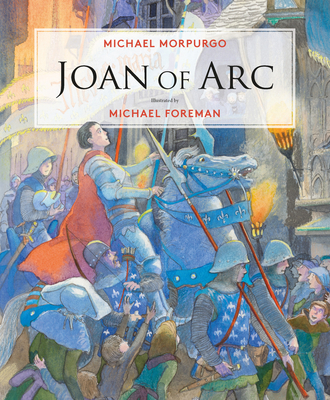 
Special Order—Subject to Availability
In 15th century France, a peasant girl faces an overwhelming task: to save her home from tyrants and restore the rightful king to the throne. To free her country Joan must leave behind everyone she has ever loved, apart from her faithful sparrow, Belami. With huge bravery and fierce determination, she follows her calling and is granted permission to ride fearlessly into battle, leading the French army against the enemy. Many years later, a lonely girl called Eloise has a dream about her heroine, Joan of Arc. This true tale of a young girl whose courage and perseverance won her a place as the bravest woman in history combines contemporary relevance with dramatic excitement.
Michael Morpurgo, OBE, has written over 100 books, including War Horse, and won many prizes, including the Smarties Prize, the Blue Peter Book Award and the Whitbread Award. Michael Foreman’s numerous books for children have earned him widespread recognition as one of the world’s best-loved illustrators.
"Morpurgo is an accomplished writer and storyteller . . . Foreman's dramatic, sweeping watercolor illustrations in shades of blue, gold, and earth tones mark the high points of the plot with full-page visual representations." —School Library Journal