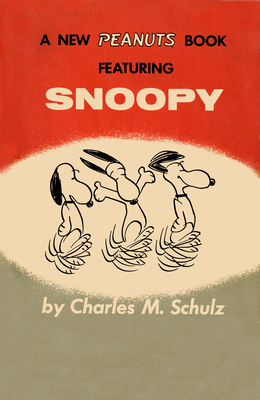 
On Our Shelves Now at:
A fifth collection of classic Peanuts newspaper comic strips features 248 daily strips from 1955-1958 and feature Snoopy, perhaps Peanuts most popular character, certainly when it comes to cainines!

This book is a facsimile edition of the fifth Peanuts collection originally published back in 1958 by the Clarke, Irwin & Company, Ltd of Toronto, Canada.


This collection of 248 daily Peanuts newspaper strips that appeared between 1955 -1958 focuses on, perhaps the most famous character in the Peanuts universe, Charlie Brown's Beagle, Snoopy. Whether he's chasing snow flakes, doing impersonations or just dancing his world famous happy jig, things are always going to a little sillier when Snoopy's around.

The strip's bitter-sweet humour and child-like innocence helped to cement the Peanuts comic strip's popularity and secure its reputation as a true, one-of-a-kind, timeless classic.

Charles Monroe Schulz (November 26, 1922 - February 12, 2000) was an American cartoonist, best known for the comic strip Peanuts (which featured the characters Snoopy and Charlie Brown, among others). He is widely regarded as one of the most influential cartoonists of all time, cited as a major influence by many later cartoonists.