Creating the Culture of Peace: A Clarion Call for Individual and Collective Transformation (Hardcover) 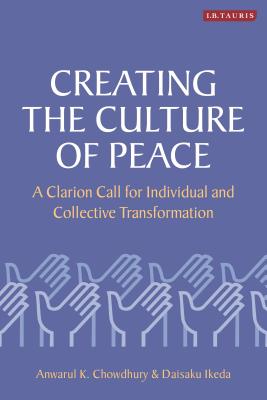 Creating the Culture of Peace: A Clarion Call for Individual and Collective Transformation (Hardcover)

The culture of peace and non-violence is essential to human existence, development and progress. In 1999, the United Nations General Assembly adopted by consensus the norm-setting, forward-looking "Declaration and Programme of Action on a Culture of Peace". Governments, institutions, NGOs, other civil society entities and, in particular, individuals - all are encouraged therein to contribute to the global movement for the culture of peace.

Related to this vision, this rich and varied dialogue discusses how the culture of peace can be achieved in the world. Based on the extensive personal and professional experiences of two high-profile thinkers and activists, they analyse the challenges unfolding at local, national and global levels and how these relate to humanity's quest for peace, human security and happiness. Although coming from very different positions - one a Buddhist philosopher, educator and leader; the other a UN diplomat renowned for his international work in peace, development and human rights - these interlocutors are united in their search for justice and better quality of life for all and their conviction that women and young people are the most effective means to achieving positive change in the world. The dialogue provides ideas on the key challenges that face our planet: poverty and deprivation, war and violence, nuclear weapons and small arms, climate change and environmental degradation, weak governance and financial crises, marginalization of women and alienation of youth and the relentless drive for materialism. They also invite us to consider how the culture of peace can be practically achieved through an individual, collective and institutional transformation.
Recognizing that global citizenship, multilateralism, women's equality and value-creating education are central and inter-linked themes, this dialogue also underscores the inherent strength of spirituality, compassion, empathy, forgiveness, respect for diversity and empowerment that comes from the trials and tribulations of life.
Ambassador Anwarul K. Chowdhury has been a career diplomat and his responsibilities have included Permanent Representative of Bangladesh to the United Nations, UN Under-Secretary-General, President of UN Security Council, President of UNICEF Executive Board, and Senior Special Advisor to UN General Assembly President. He has received Honorary Doctorates and prestigious awards for his inspiring work on the culture of peace and women's equality including the U Thant Peace Award, UNESCO Gandhi Gold Medal for Culture of Peace, Spirit of the UN Award, University of Massachusetts Boston Chancellor's Medal for Global Leadership for Peace and 2018 Global Women's Peace Award. He is the Founder of New York-based NGO coalition, Global Movement for The Culture of Peace (GMCoP). Daisaku Ikeda is President of Soka Gakkai International, a Buddhist organization with some twelve million adherents in 192 countries and regions throughout the world. A prolific author, poet, peace activist and educator, he is the author of numerous books on Buddhism, humanism and ethics, and received the United Nations Peace Award in 1983. His work to restore Chinese-Japanese relations as well as his contributions to the promotion of world peace, cultural exchange and education have been widely recognised. The world's academic community has awarded him more than 350 academic degrees.