A Philosophy of Simple Living (Hardcover) 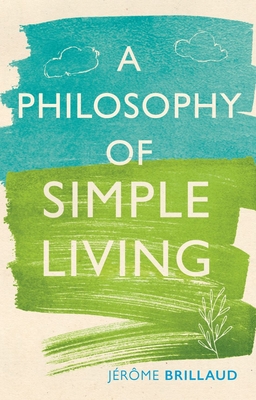 A Philosophy of Simple Living (Hardcover)


In Stock—Click for Locations
Today, “simple living” is a rallying cry for anti-consumerists, environmentalists, and anyone concerned with humanity’s effect on the planet. But what is so revolutionary about a simple life? And why are we so fascinated with simplicity today? A Philosophy of Simple Living charts the ideas, motivations, and practices of simplicity from antiquity to the present day. Bringing together an array of people, practices, and movements, from Henry David Thoreau to Steve Jobs, and from Cynics and Shakers to the “slow movement,” voluntary simplicity, and degrowth, this book is as comprehensive as it is concise. Written in elegant, spare prose, A Philosophy of Simple Living will be of great benefit to all who wish to declutter and pare back their complicated, modern lives.
Jérôme Brillaud is a lecturer of French at the University of Manchester. He is the author, in French, of Sombres Lumières as well as English-language essays on early modern philosophy and literature.
"In this insightful debut, Brillaud. . . analyzes the 'simple life' by examining historical figures who 'saw simplicity as a way of life.' Among the exemplars of simplicity Brillaud surveys are antiestablishment spiritual pioneers such as the desert monks of early Christianity and the Shakers of the late eighteenth century, as well as philosophical giants including fourth-century BCE philosopher Diogenes the Cynic and American transcendentalist Henry David Thoreau. Each, Brillaud writes, sought to lessen the noise of a busy life in order to 'remain attuned to the quiet activity of living which transpired in and around them.' Ironically, in offering a diverse array of paragons and dissecting their choices—for example, when he opens the book with a deep dive into various stages of Greek philosophy, language, and history—Brillaud’s study gets pretty complicated. While the academic nuance helps illustrate different approaches to the simple life, one is left wondering what the simple life really is; Brillaud admits it’s 'a concept with far-reaching resonance' and that it cannot be reduced to 'static principles, lofty ambitions, or technological expedients.' Those looking for advice on creating a 'life governed by simple rules' will enjoy Brillaud’s inviting portraits."
— Publishers Weekly

“A powerfully insightful work that deserves wide attention at a time of unprecedented confoundment and burden in the human condition.”
— Brendan Gleeson, author of "The Urban Condition"

“Thoughtful and beautifully written. . . . A must-read in our era of noise and distraction.”
— Phillip John Usher, New York University

"This fascinating and well-written book by Brillaud does not evangelize about simple living or tell readers how to think or live. Rather, it is a diverse and profound review of various perspectives on simplicity that have emerged throughout the ages, from the Ancient Greeks, through Christianity, to the modern Voluntary Simplicity Movement, with notable discussions of prominent figures including Diogenes, Jean-Jacques Rousseau, and Henry Thoreau. Paradoxically, however, it turns out the notion of ‘simplicity’ is surprisingly complex, but readers will be both challenged and enriched by this paradox. Brillaud has made a fine contribution to the philosophical literature on a concept that is as important as it is neglected."
— Samuel Alexander, author of "Prosperous Descent: Crisis as Opportunity in an Age of Limits" and editor of "Simple Living in History: Pioneers of the Deep Future"

"Brillaud's superb work is a powerful reminder that Western intellectual and cultural history is full of admiration for simple living. In an age of soaring emissions and growing environmental impacts, a return to simplicity—to localism, to conscious living, to low-impact lifestyles—is not only a means of survival and an ethical imperative, but also a pathway to rediscovering the basic joys of life."
— Jeremy Caradonna, adjunct professor of environmental studies, University of Victoria, author of "Sustainability: A History"