Erasmus of Rotterdam: The Spirit of a Scholar (Renaissance Lives ) (Hardcover) 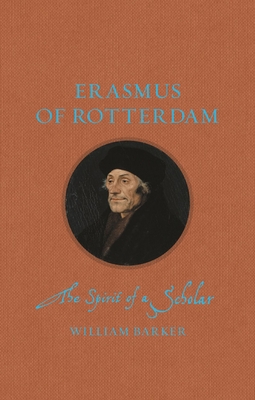 Erasmus of Rotterdam: The Spirit of a Scholar (Renaissance Lives ) (Hardcover)

Erasmus of Rotterdam came from an obscure background but, through remarkable perseverance, skill, and independent vision, became a powerful and controversial intellectual figure in Europe in the early sixteenth century. He was known for his vigorous opposition to war, intolerance, and hypocrisy, and at the same time for irony and subtlety that could confuse his friends as well as his opponents. His ideas about language, society, scholarship, and religion influenced the rise of the Reformation and had a huge impact on the humanities, and that influence continues today. This book shows how an independent textual scholar was able, by the power of the printing press and his wits, to attain both fame and notoriety. Drawing on the immense wealth of recent scholarship devoted to Erasmus, Erasmus of Rotterdam is the first English-language popular biography of this crucial thinker in twenty years.
William Barker is the Inglis Professor and former president of the University of King’s College as well as professor emeritus of English at Dalhousie University. He is the editor of The Adages of Erasmus.
"General readers attracted to Barker’s beautifully presented, relatively short, succinctly styled new biography of Erasmus, recognized as the quintessential, European intellectual of the late medieval period, will discover a figure unquestionably more celebrated than known."
— Morning Star

"This book is a gem. It follows Erasmus, the great Renaissance humanist, through a life full of travel, comity, controversy, and scholarship. Barker offers expert distillations of Erasmus’s wide-ranging works and a judicious selection of examples, references, and images. We learn about the many ingredients of Erasmus’s success as a scholar, including his personality traits and intellectual commitments, and his patrons, friends, and helpers."
— Ann Blair, Carl H. Pforzheimer University Professor, Harvard University

"An engaging and very readable popular biography, at times amusing, with insights into the relation of the humanities in Erasmus’s time to our own."
— Erika Rummel, University of Toronto