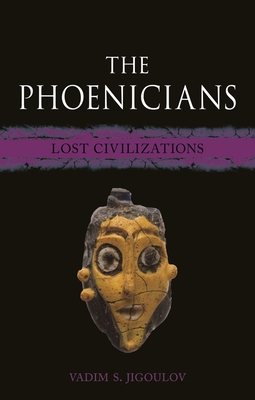 
In Stock—Click for Locations
Drawing on an impressive range of archaeological and textual sources and a nuanced understanding of biases, this book offers a valuable reappraisal of the enigmatic Phoenicians.

The Phoenicians is a fascinating exploration of this much-mythologized people: their history, artistic heritage, and the scope of their maritime and colonizing activities in the Mediterranean. Two aspects of the book stand out from other studies of Phoenician history: the source-focused approach and the attention paid to the various ways that biases—ancient and modern—have contributed to widespread misconceptions about who the Phoenicians really were. The book describes and analyzes various artifacts (epigraphic, numismatic, and material remains) and considers how historians have derived information about a people with little surviving literature. This analysis includes a critical look at the primary texts (classical, Near Eastern, and biblical), the relationship between the Phoenician and Punic worlds; Phoenician interaction with the Greeks and others; and the repurposing of Phoenician heritage in modernity. Detailed and engrossing, The Phoenicians casts new light on this most enigmatic of civilizations.
Vadim S. Jigoulov is a lecturer at Morgan State University and the Maryland Institute College of Art in Baltimore. His books include The Social History of Achaemenid Phoenicia: Being a Phoenician, Negotiating Empires.
"The Phoenicians is a clear, up-to-date, and balanced assessment of one of the less known great civilizations of the past. It has maps, photographs of objects, and recreation illustrations. Suitable for anyone keen to understand the basics, become familiar with current historical debates and comprehend Phoenicia in relation to historical rivals and partners."
— AlexanderAdamsArt.com

“Firmly grounded in material and written records and incorporating the latest discoveries and perspectives, Jigoulov offers a compelling and accessible view of Phoenician culture, one that brings us closer to understanding this much influential and resilient Mediterranean civilization.”
— Carolina López-Ruiz, Ohio State University

“In his uniquely accessible and fitting contribution to the Lost Civilizations series, Jigoulov ably rescues these enigmatic peoples from a seemingly impervious past. He virtually transports them to the twenty-first century, affording us the unprecedented opportunity to encounter 'the Phoenician' in a new, highly metamorphosed form.”
— Brian Schmidt, Professor of Biblical Studies and Ancient West Asian Cultures, University of Michigan

“The Phoenicians is full of data and reflections, with an up-to-date bibliography containing works in several languages. This fact is very important compared to other similar texts because much of the literature is not in English. The author is therefore the intermediary of important studies and provides readers with an updated, correct, and enjoyable picture of the fascinating and elusive world of the Phoenicians.”
— Ida Oggiano, National Research Council of Italy