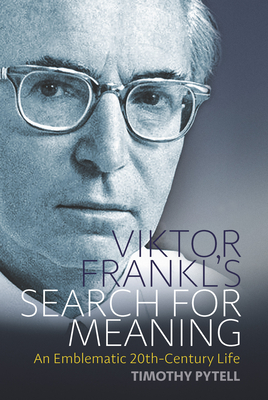 ★" T]his is a scholarly, commendable biography and intellectual history. Lay readers will be challenged; psychologists and historians will be grateful."--Library Journal, starred review

First published in 1946, Viktor Frankl's memoir Man's Search for Meaning remains one of the most influential books of the last century, selling over ten million copies worldwide and having been embraced by successive generations of readers captivated by its author's philosophical journey in the wake of the Holocaust.

This long-overdue reappraisal examines Frankl's life and intellectual evolution anew, from his early immersion in Freudian and Adlerian theory to his development of the "third Viennese school" amid the National Socialist domination of professional psychotherapy. It teases out the fascinating contradictions and ambiguities surrounding his years in Nazi Europe, including the experimental medical procedures he oversaw in occupied Austria and a stopover at the Auschwitz concentration camp far briefer than has commonly been assumed.

Throughout, author Timothy Pytell gives a penetrating but fair-minded account of a man whose paradoxical embodiment of asceticism, celebrity, tradition, and self-reinvention drew together the complex strands of twentieth-century intellectual life.

From the introduction:
At the same time, Frankl's testimony, second only to the Diary of Anne Frankin popularity, has raised the ire of experts on the Holocaust. For example, in the 1990s the United States Holocaust Memorial Museum in Washington purportedly refused to sell Man's Search for Meaningin the gift shop.... During the late 1960s and early 1970s Frankl became very popular in America. Frankl's survival of the Holocaust, his reassurance that life is meaningful, and his personal conviction that God exists served to make him a forerunner of the self-help genre.

Timothy Pytell is Chair of the History department at California State University, San Bernardino. He published an abridged version of this biography, titled Viktor Frankl: Das Ende eines Mythos, in German in 2005.