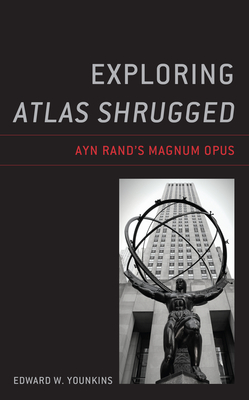 
Special Order—Subject to Availability
This book explores Ayn Rand's monumental work, Atlas Shrugged, which presents a revolutionary new philosophical system in the form of an inspiring novel. Edward W. Younkins explains how Rand's masterwork is one of the most influential books ever published, impacting a variety of disciplines including philosophy, literature, economics, business, and political science, among others. Exploring Atlas Shrugged analyzes the novel's integrating elements of theme, plot, and characterization from many perspectives and on many levels of meaning. The chapters in this book are accessible and rewarding, offering fresh insights to both new readers and to scholars who have studied Rand's masterpiece over many years. It is also a valuable resource for teachers and students who use Atlas Shrugged in their classes. Such a rich and complex novel warrants and rewards additional study and critical analysis. The author explains how Atlas Shrugged expounds a radical philosophy, presenting a view of man and man's relationship to existence and manifesting the essentials of an entire philosophical system of metaphysics, epistemology, politics, and economics.
Edward W. Younkins is professor of accountancy and executive director of the Institute for the Study of Capitalism and Morality at Wheeling University.