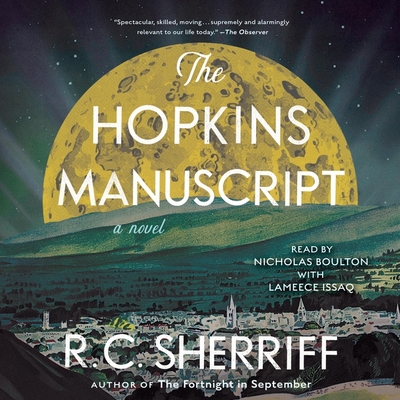 
Not On Our Shelves—Ships in 1-5 Days
For fans of the popular and award-winning Netflix movie Don't Look Up, a prescient, rediscovered speculative novel about how a small English village prepares for the end of the world.Edgar Hopkins is a retired math teacher in his mid-fifties with a strong sense of self-importance, whose greatest pride in life is winning poultry breeding contests. When not meticulously caring for his Bantam, Edgar is an active member of the British Lunar Society. Thanks to that affiliation, Edgar becomes one of the first people to learn the moon is on a collision course, headed towards Earth. Members of the society are sworn to secrecy but eventually the moon looms so large in the sky that the government can no longer deny the truth. It's during these final days that Edgar befriends two young siblings and writes what he calls The Hopkins Manuscript--a testimony juxtaposing the ordinary and extraordinary as Edgar and the villagers dig trenches and play cricket before the end of days. First published in 1939, as the world was teetering on the brink of global war, R.C. Sherriff's classic speculative novel is a timely and powerful warning from the past that captures the breadth of human nature in all its complexity.