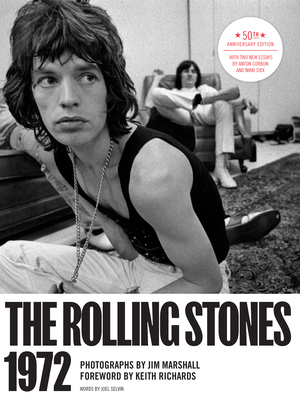 The year 1972 brought together two icons of rock 'n' roll at the peaks of their careers: legendary photographer Jim Marshall and the Rolling Stones. Selected by LIFEMagazine to photograph the Stones' Exile on Main St. tour, Marshall had a week of unlimited access to the band. The results are his now-iconic images of the Stones, onstage in their full glory and backstage in moments of unguarded camaraderie.

Re-released in a deluxe, 50th Anniversary Edition, this gorgeous volume presents Marshall’s photos as they were meant to be shown: large-scale and in rich high-contrast tones. The book contains never-before-seen proof sheets and new essays by photographer and film director Anton Corbijn and Nikki Sixx of Mötley Crüe. This is the ultimate, immersive experience of one of the greatest moments in music history.

MUST-HAVE FOR FANS: Whether you’re a die-hard Stones fan, a vintage photography lover, or a music history buff, this collection of photos and exclusive essays from music’s all-time greats is required reading.

A BACKSTAGE VIEW: Immerse yourself in the raw energy of the year 1972 and dive backstage with the Rolling Stones on one of their most iconic tours of all time. Even fifty years later, Jim Marshall’s photographs will thrill and inspire you.

Perfect for:
Jim Marshall, who died in 2010 at age 74, is widely celebrated as a premier music photographer and a pioneer of the genre. His portfolio includes photos of virtually every major musician of his era, not only the icons of rock 'n' roll, but also giants of jazz, blues, and country. Annie Leibowitz called him "THE rock 'n' roll photographer." Marshall was a legend not only for his outsize personality but also for the way he seemed to disappear when behind his trademark Leica camera, thereby producing some of the most intimate and iconic images in music history.

Joel Selvin is a longtime music journalist for the San Francisco Chronicle. He is the author of seventeen books.