The Glorious Adventure: Through the Mediterranean in the Wake of Odysseus (Paperback) 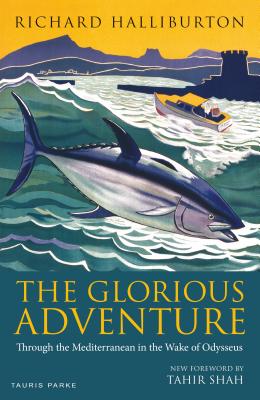 The Glorious Adventure: Through the Mediterranean in the Wake of Odysseus (Paperback)


Special Order—Subject to Availability
It was perhaps inevitable that Richard Halliburton, such a romantic, imaginative wanderer, would follow in the footsteps of another legendary traveller - Odysseus. Halliburton's second book, The Glorious Adventure describes his journey through the Mediterranean in the shadow of his mythical hero. In Greece, Halliburton charged Mount Olympus 'in order to visit the gods that dwelled there'; he swam the Hellespont as Byron had before him and journeyed on to Troy, where Odysseus's long adventure began. He sailed to Stromboli in the Tyrrhenian Sea, home of Aeolus god of the winds; then to the Bay of Naples, Circeo - 'island' of Circe - and Li Galli, the siren isles that shimmered off the Amalfi coast. Battling through the Straits of Messina, Odysseus's Scylla and Charybdis, he explored Sicily and Corfu before setting out for the shores of Ithaca, long-forgotten home for one, the end of an adventure for another. As epic and eventful as The Odyssey itself and one of the most captivating travel books of the 20th century, The Glorious Adventure evokes the romance of another time, when heroes and gods walked the earth.
Richard Halliburton (1900-1939) was America's greatest adventurer and one of the most successful adventure travel writers of the twentieth century. Through a life spent chasing horizons and concocting ever more daring schemes - from swimming the length of the Panama Canal to flying around the world in an open cockpit plane or crossing the Alps on an elephant - Halliburton dazzled the western world. His final adventure, sailing a junk across the Pacific, was also his last. Halliburton disappeared in March 1939 and was never seen again. A great and original traveller, his wild adventures live on in the books that have captivated millions of readers and inspired generations of writers.