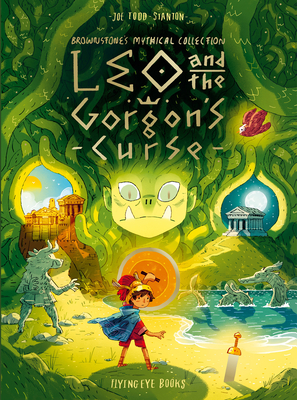 
In Stock—Click for Locations
The fourth title in Joe Todd-Stanton's Brownstone's Mythical Collection series ventures into the world of Ancient Greek mythology. For readers not yet old enough for Rick Riordan's Percy Jackson & The Olympians series.

Full of dangerous challenges, cunning monsters, and godly heroes, this graphic novel is sure to be a hit with young readers interested in Greek mythology.

Buried amongst the treasures in Professor Brownstone's vaults, lie a humble collection of books. Filled with legendary stories from his ancestors, they tell of fearless fighters and unlikely heroes. The 4th entry in the Brownstone's Mythical Collection series follows Leo Brownstone, who's been tasked with hunting a terrifying gorgon. But is the gorgon the menace everyone thinks it is?
Joe Todd-Stanton is from Brighton and grew up drawing with his mum. He studied Illustration at University of the West of England, afterwards moving to London where he currently resides. His children’s book, The Secret of Black Rock, won the Waterstones picture book of the year prize in 2018 and since then he has written and illustrated seven books with Flying Eye Books.
“Todd-Stanton’s stories serve the threefold purpose that all good children’s literature aspires to: they look to educate in a fun and accessible way, leave the reader with a strong moral lesson to consider, and provide a rollicking good tale along the way.”
—Broken Frontier