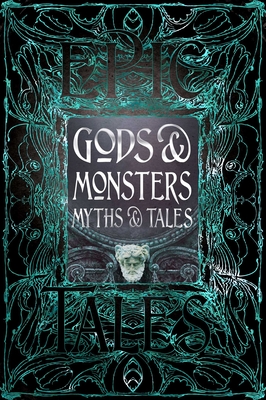 By Dr Liz Gloyn (Foreword by)


Special Order—Subject to Availability
Myths and legendary tales from around the world are packed with gigantic rivalries; gods, monsters and giants compete for supremacy over the land, the creatures within and the universe beyond. Zeus clashes with the all-powerful Typhon, Odin is destined to face the great wolf Fenrir during Ragnarok. And yet monsters such as the Minotaur, and giants of all kinds, dragons even, are monsters only to those too fearful to understand them, while others such as the Sirens, or the weird sisters, are malevolent without remorse.

Such mythical gods and their foes, make great adventures for the modern reader tracing the roots of The Game of Thrones, Lord of the Rings and The Witcher, where good and evil are morphed into real avatars and creatures of vivid imagination. In these pages you'll find the gods of the heavens and mountains, and the spirits and demons of the deep sea, the dark woods and the burning sands. From the gods of Babylon and Ancient Egypt to the Norse Aesir, from the pantheon of mighty Greek deities to the gods of the earth and the sky in Pacific legends, most of the great traditions are featured here, with monsters galore: Anansi the trickster spider, the chaos serpent Apep, the Wendigo (or Windegoo spirits), the Greek Sphinx, the drought demon dragon Vritra and the Chimera to name a few.

The Flame Tree Gothic Fantasy, Classic Stories and Epic Tales collections bring together the entire range of myth, folklore and modern short fiction. Highlighting the roots of suspense, supernatural, science fiction and mystery stories the books in Flame Tree Collections series are beautifully presented, perfect as a gift and offer a lifetime of reading pleasure.
Dr Liz Gloyn is Reader in Classics at Royal Holloway, University of London, UK. Her many research interests include the reception of classics in popular culture, with a particular focus on film and children's literature. She has recently published Tracking Classical Monsters in Popular Culture (2019). As well as writing for publications like History Today and Strange Horizons, she tweets about her research at @lizgloyn.