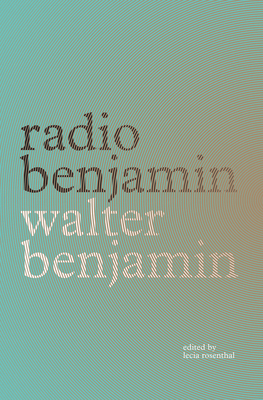 Walter Benjamin was fascinated by the impact of new technology on culture, an interest that extended beyond his renowned critical essays. From 1927 to ’33, he wrote and presented something in the region of eighty broadcasts using the new medium of radio. Radio Benjamin gathers the surviving transcripts, which appear here for the first time in English. This eclectic collection demonstrates the range of Benjamin’s thinking and his enthusiasm for popular sensibilities. His celebrated “Enlightenment for Children” youth programs, his plays, readings, book reviews, and fiction reveal Benjamin in a creative, rather than critical, mode. They flesh out ideas elucidated in his essays, some of which are also represented here, where they cover topics as varied as getting a raise and the history of natural disasters, subjects chosen for broad appeal and examined with passion and acuity.

Delightful and incisive, this is Walter Benjamin channeling his sophisticated thinking to a wide audience, allowing us to benefit from a new voice for one of the twentieth century’s most respected thinkers.

Walter Benjamin (1892–1940) was a German-Jewish Marxist literary critic, essayist, translator and philosopher. He was at times associated with the Frankfurt School of critical theory and is the author of Illuminations; The Arcades Project; and The Origin of German Tragic Drama. Lecia Rosenthal is the author of Mourning Modernism: Literature, Catastrophe, and the Politics of Consolation. She has taught at Columbia and Tufts.
“Everything which fell under the scrutiny of his words was transformed, as though it had become radioactive.”
—Theodor Adorno

“Walter Benjamin was one of the unclassifiable ones ... whose work neither fits the existing order nor introduces a new genre.”
—Hannah Arendt

“Benjamin buckled himself to the task of revolutionary transformation … his life and work speak challengingly to us all.”
—Terry Eagleton

“There has been no more original, no more serious critic and reader in our time.”
—George Steiner