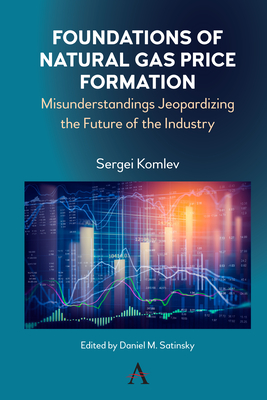 'Foundations of Natural Gas Price Formation' examines the fundamentals of natural gas price formation and the five principal features that make it unique in the world of commodities. It presents a model of hybrid gas pricing developed by Sergei Komlev from his detailed analysis of the interlinked impact of these features that is presented as a corrective to potential market failure.

Using mainstream economic theory, the book presents hybrid-pricing mechanisms not previously analyzed. Through a failure to understand the role of hybrid-pricing, boosters of spot pricing mechanisms through gas hubs are promoting an incorrect understanding of gas markets that will lead to market failure and to potential critical supply shortages in the near-term future. 'Foundations of Natural Gas Price Formation' defends the system of oil-indexed pricing as an accurate, market-based mechanism that has stood the test of time.

Sergei Komlev, head of Contract Structuring and Price Formation Directorate at Gazprom Export, is a well-recognized name in the European natural gas industry and a frequent participant in international gas conferences. Daniel Satinsky, attorney, author and independent scholar, has collaborated with Sergei Komlev for more than 25 years in presenting his ideas to English-speaking audiences.