A Purse Full of Tales: Folk Tales from Korea (Paperback) 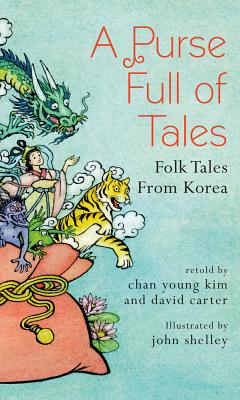 A Purse Full of Tales: Folk Tales from Korea (Paperback)


Special Order—Subject to Availability
This book is a collection of folk tales from both North and South Korea, in which readers will encounter traditional Korean dragons, heavenly maidens, dokkaebis (goblins), bluebirds and many eccentric characters such as naughty children, greedy men and strange old people. Many of the tales involve Shamanistic, Buddhist and Taoist cosmology, transporting readers into a surrealistic fantasy world. As in folk tales from other cultures, a considerable number of protagonists in this book face distressing situations and eventually overcome them. These sequences are usually depicted through humor, jest and wit, which will have readers smile in recognition. Korean folk tales have not been widely translated into English, and this book provides an opportunity for readers to develop a good insight into the unique properties of Korean folk tales.
Chan Young Kim has translated Korean literary works and a large range of Korean cuisine for various newspapers and magazines. David Carter was a professor, writer, translator and freelance journalist whose books include East Asian Cinema.