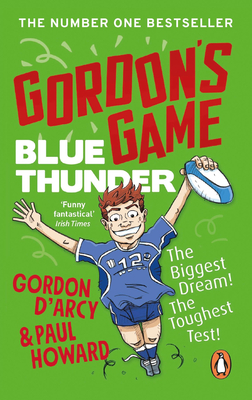 
Special Order—Subject to Availability
Gordon D'Arcy - the only kid at school with a Six Nations medal hidden under his pillow! Though helping Ireland to win the Grand Slam feels like it was just a dream.

Now, he's been given a brand new challenge - the chance to play for Leinster.

After learning so many lessons playing for Ireland - including how to make a complete eejit of himself in front of millions of people - fitting in at Leinster should be a breeze. Right?

Unfortunately, not. After his first training session, he sees why the team is mocked for being 'soft' (those stories about players wearing fake tan? All true!). Now he knows why so many people from Leinster support Munster.

But Gordon settles down to work under an inspiring coach named Joe Schmidt. Joe promises that, with hard work, discipline and a bit of self-belief, Leinster can win the European Cup.

Maybe another dream can come true!
Paul Howard (Author) Paul Howard is a journalist, author and comedy writer best known as the creator of the No 1 bestselling Ross O'Carroll-Kelly series. He has won a record four Irish Book Awards and is a former Irish Sports Journalist of Year and Irish Newspaper Columnist of the Year. Gordon D'Arcy (Author) Gordon D'Arcy is Ireland's longest-serving rugby international, first playing in 1999 while he was still at school. He was part of teams that won three European Cups, two Six Nations Championship, and the historic Grand Slam of 2009. He retired from rugby in 2015.