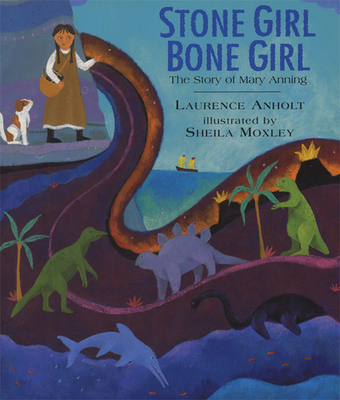 As a baby, Mary was struck by lightning, then as a little girl she found a fossilised sea monster, the most important prehistoric discovery of its time. This spectacular tale of a little girl who dared to be different and who followed her dreams will inspire young children.

Beautiful illustrations and narrative text help children to learn how Mary discovered new fossils – and how her observations rocked the natural history world. Be inspired by Mary's work as a woman in the field of science – especially as her achievements weren't recognised until after her death.

Perfect for kids interested in dinosaurs and rocks, and for parents looking for strong female role models in science.

Laurence Anholt is part of a husband-and-wife team who have worked together on more than 60 picture books, published all over the world in more than 17 different languages. Their picture books – including the Chimp and Zee series – have won numerous awards and have been featured on television and radio. Laurence has been described by William Watt as one of the most versatile authors writing for children today. He was brought up mainly in Holland where he developed a lasting passion for art. He is a much sought after public speaker, appearing at conferences such as the European Council of International Schools Conference, the Northern Children's Book Festival and the Edinburgh Festival.

Sheila Moxley studied at Bournemouth and Poole College of Art and graphic design at St Martin's School of Art. Skip Across the Ocean, a collection by Floella Benjamin, was her first book for Frances Lincoln. Her other books include Joy to the World by Saviour Pirotta, Heather Maisner's Diary of a Princess, Rebecca's Passover by Adele Geras and All the Colours of the Earth, a collection of rhymes edited by Wendy Cooling. She lives in Falmouth, Cornwall.

An enjoyable story. The somewhat cartoon-like illustrations - making beautiful use of rich colours that saturate the page - may appeal to slightly younger readers.