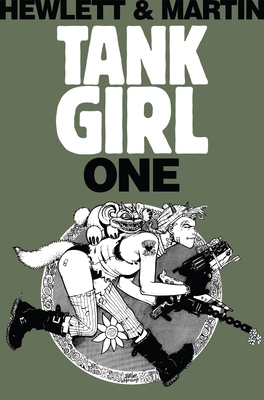 
Special Order—Subject to Availability
She’s back to wreck her own unique brand of havoc! From the depths of the outback she charges, astride her fabulous tank! Run for the Hills! It’s... Tank Girl!

Join everybody’s favourite beer-swilling, chain-smoking, kangaroo-worrying lunatic as she blitzes her way through a dazzling array of bizarre adventures, including bounty hunting, delivering colostomy bags to Australian presidents, kangaroo boxing... and many more outrageous and mind-warping thrills! Marking the 20th anniversary of Tank Girl, with a new introduction from Alan Martin, and rarely seen material from Jamie Hewlett, this is the start of the ultimate collection. Presented for the first time, in chronological order and in glorious black and white - the way nature intended!
Warning: Adults only!

Alan Martin is the co-creator of Tank Girl (along with artist Jamie Hewlett), and writer of the first three Tank Girl graphic novels. He is also the writer of Armadillo!, a Tank Girl prose novel (also available from Titan Books).

Jamie Hewlett has worked on a wide variety of comics projects, including Fireball and 2000 AD’s Hewligan’s Haircut,visual genius behind virtual pop group Gorillaz, soon to get their own show on MTV UK.

"As much of a wisecracker as she is woman warrior.” - New York Times

"Here in these newly minted Tank Girl editions stands Hewlett’s art as it was originally presented. Raw, powerful, and totally screwed-up bonkers. It’s beautiful black and white cartooning at its best and it’s one of the biggest reasons I fell in love with this book." - Ain't It Cool News