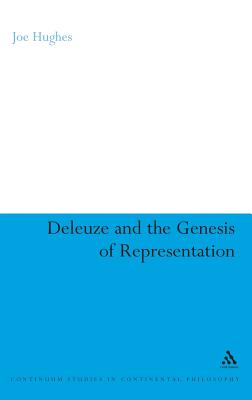 
Not On Our Shelves—Ships in 1-5 Days
(This book cannot be returned.)
Deleuze and the Genesis of Representation is a systematic study of three of Deleuze's central works: Difference and Repetition, The Logic of Sense and, with Guattari, Anti-Oedipus. Hughes shows how each of these three works develops the Husserlian problem of genetic constitution. After an innovative reading of Husserl's late work, Hughes turns to a detailed study of the conceptual structures of Deleuze's three books. He demonstrates that each book is surprisingly similar in its structure and that all three function as nearly identical accounts of the genesis of representation.


In a highly original and crucial contribution to Deleuze Studies, this book offers a provocative perspective on many of the questions Deleuze's work has raised: What is the status of representation? Of subjectivity? What is a body without organs? How is the virtual produced, and what exactly is its function within Deleuze's thought as a whole? By contextualizing Deleuze's thought within the radicalization of phenomenology, Hughes is able to suggest solutions to these questions that will be as compelling as they are controversial.
Joe Hughes received his PhD from the University of Edinburgh, UK and currently teaches at the University of Minnesota, USA. He is the co-translator of Deleuze's Pericles and Verdi (Columbia University Press, 2002).