Crossing the Congo: Over Land and Water in a Hard Place (Hardcover) 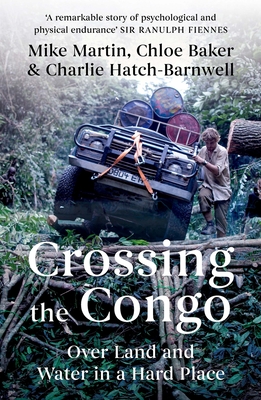 Crossing the Congo: Over Land and Water in a Hard Place (Hardcover)


Not On Our Shelves—Ships in 1-5 Days
*** Shortlisted for the Edward Stanford Travel Writing Award 2016 in the category of Adventure Travel ***
In 2013, three friends set off on a journey that they had been told was impossible: the north-south crossing of the Congo River Basin, from Kinshasa, in the Democratic Republic of Congo, to Juba, in South Sudan. Traversing 2,500 miles of the toughest terrain on the planet in a twenty-five year-old Land Rover, they faced repeated challenges, from kleptocracy and fire ants to non-existent roads and intense suspicion from local people. Through imagination and teamwork -- including building rafts and bridges,
conducting makeshift surgery in the jungle and playing tribal politics -- they got through. But the Congo is raw, and the journey took an unexpected psychological toll on them all. Crossing the Congo is an offbeat travelogue, a story of friendship and what it takes to complete a great journey against tremendous odds, and an intimate look into one of the world's least-developed and most fragile states, told with humor and sensitivity.

Mike Martin is a former British Army officer who has worked in Afghanistan, Somalia and Myanmar. His previous books include An Intimate War: An Oral History of the Helmand Conflict, and he holds a PhD in war studies from King's College London. Chloe Baker is an anaesthetist working in critical careand emergency medicine. She has previously published research conducted in Tanzania, Sierra Leone and Togo, and recently received the Ebola Medal for Service in West Africa. Charlie Hatch-Barnwell is a photojournalist. He was UN Winner of the prestigious 2014 Moscow Photo Awards (Portrait Category)and has been shortlisted twice for the Travel Photographer of the Year Award.