Ochre and Rust: Artefacts and Encounters on Australian Frontiers (Paperback) 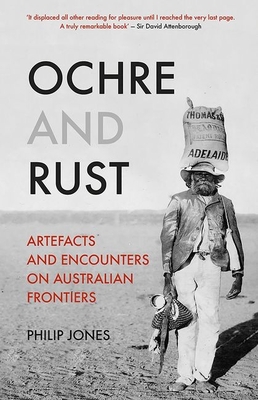 Ochre and Rust: Artefacts and Encounters on Australian Frontiers (Paperback)


Not On Our Shelves—Ships in 1-5 Days
Ochre and Rust offers a fresh perspective on frontier relations between Australian Aboriginal people and European colonists. Nine museum artefacts take the reader into a fascinating zone of encounter and mutual curiosity between collectors and those indigenous people who piqued or responded to their interest. While colonialism is the broad frame, details gleaned from archives, images and the objects themselves reveal a new picture of interaction between individual Aboriginal people and European collectors. Philip Jones explores and makes sense of particular historical moments in colonial history, when Aboriginal people perceived and expected other, more elusive outcomes. Ochre and Rust, an elegantly written challenge to received wisdom about the colonial frontier, has won Australia's inaugural Prime Minister's Award for Literary Non-Fiction.

Philip Jones is a social historian and ethnographer based at the South Australian Museum in Adelaide. He has undertaken extensive fieldwork with Aboriginal people in southern and central Australia. His historical research is based on those relationships, as well as a deep familiarity with museum artefacts and their trajectories, through time and space.