Walking on Lanzarote and Fuerteventura: 45 Walks Including on Isla La Grciosa (Paperback) 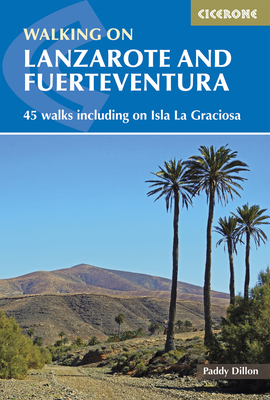 Walking on Lanzarote and Fuerteventura: 45 Walks Including on Isla La Grciosa (Paperback)

This book offers 21 walks on Lanzarote, two on Isla La Graciosa (off Lanzarote's northern coast) and 22 on Fuerteventura, including 14 walks on the GR 131 trail, which crosses both islands. These 45 traditional routes link several villages and span a range of arid agricultural and natural areas.

Both popular holiday destinations, Lanzarote and Fuerteventura are two remarkably different islands. Lanzarote has a fascinating volcanic national park at Timanfaya, and vineyards fill huge areas of black volcanic ash at La Geria; Fuerteventura is famous for extensive golden beaches, but its splendid mountain paths are less well-known. Both islands are crossed by new waymarked trails.

The guide offers routes suitable for a variety of abilities, and gives all the information walkers need including where to get food and drink, notes on points of interest along the way and on how to link shorter routes together to create longer journeys. Many routes are accessible using the good bus services on offer on both islands, and both islands are easily linked by frequent half-hour ferries and offer good ferry and air links to their neighbouring Canary islands.

Paddy Dillon is a prolific outdoor writer with over 60 guidebooks to his name, as well as more than a dozen booklets and brochures. He writes for a number of outdoor magazines and other publications, and produces material for tourism groups and other organisations. He lives near the Lake District and has walked in every county in England, Scotland, Ireland and Wales; writing about walks in every one of them. He has led guided walks and walked extensively in Europe, as well as in Nepal, Tibet, Africa and the Rocky Mountains of Canada and the US.