Trekking The GR5 Trail Benelux and Lorraine: The North Sea to the Vosges Mountains (Paperback) 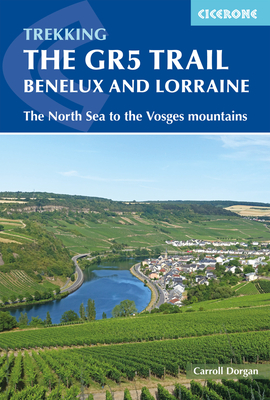 Trekking The GR5 Trail Benelux and Lorraine: The North Sea to the Vosges Mountains (Paperback)

Guidebook to the northernmost section of the GR5 - from Hoek van Holland in the Netherlands, through Belgium and Luxembourg, to Schirmeck in the northeast of France. Described over 49 stages, this 1000 kilometre section of the GR5 is relatively easy and ideal for those who don't want to hike up and down steep mountains - or not just yet.

Clear route description is accompanied by 1:100K mapping, together with information on points of interest passed along the way. Background information on landscape, wildlife and history is included, as is practical information - everything from clothing, equipment, food, drink and waymarking to maps, money and staying in touch - making planning and executing a trip as easy as possible.

One of the world's best long distance walking trails, the GR5, in its entirety, covers an impressive 1423 miles (2290km) on its way from the North Sea to the Mediterranean. This northern stretch - before the trail hits the depth of the Vosges - is as much a cultural experience as it is a walk through nature. Walkers will discover different linguistic communities, culinary traditions and architecture. Those partial to museums will also be in for a treat - from tugboats to wine, salt to flint, the route passes by an impressive array of interesting cultural institutions.

Two further Cicerone guidebooks cover the remaining sections of the GR5; 'The GR5 Trail - Vosges and Jura', and 'The GR5 Trail' which covers the route from Lac Léman to the Mediterranean.

Carroll Dorgan was born and educated in the United States. Pushed by the absence of jobs for inexperienced history graduates where he happened to be living in 1975 and pulled by his wanderlust, Carroll pursued a teaching career for a decade in international schools in Iran, Belgium, England and France. He then returned to California to qualify as a lawyer, but soon moved back to Europe to practice international law in the Netherlands and France. In all of those places, he explored nearby hiking trails. While living in Liège, he discovered the GR5, which passes near the city on its way from Hoek van Holland to Nice. Over the years, the GR5 became his favourite trail. Carroll hiked in the Olympics, Cascades, Sierras and Green Mountains in the United States and the Pyrenees and Auvergne in France, but he was always drawn back to the GR5. Upon completing a trek on the GR5 in the Vosges, Jura and Alps in 1989, he dreamt of hiking the entire trail someday. The dream became a plan and then his first adventure after retiring in 2015. Carroll enjoyed that long trek so much – and is so keen to share his enthusiasm for the trail – that he returned to the GR5 to write the guide to the Northern GR5. Carroll lives in France with Mary, his wife and hiking companion.