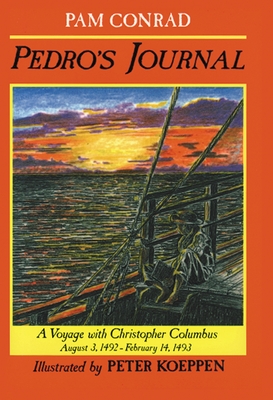 
Special Order—Subject to Availability
(This book cannot be returned.)
Pedro can read and write better than any boy in the small Spanish town of Palos. That's why Christopher Columbus signs him on as part of his crew of the Santa Maria. The young Pedro records his adventures in a journal, where he also keeps sketches of what he sees during the treacherous journey across the Atlantic. Award-winning author Pam Conrad and illustrator Peter Koeppen create a thrilling and believable re-creation of one boy's account of this epic voyage.
Pam Conrad (deceased)has written many outstanding novels for young people, including Stonewordsand Prairie Songs, which won the 1986 International Reading Association's Children's Book Award.

Peter Koeppen (deceased)is the illustrator of A Swinger of Birches: Poems of Robert Frost for Young People, which became an American Book Awards Nominee.