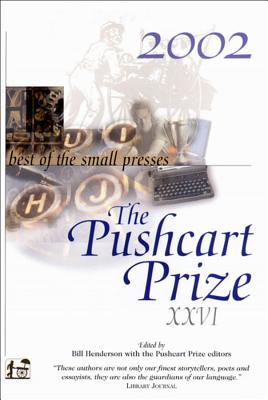 This is book number 26 in the The Pushcart Prize Anthologies series.

For the year 2002 edition, The Pushcart Prize presents over sixty stunning short stories, poems, and essays selected from hundreds of small presses and literary journals with the help of over 200 distinguished contributing editors. In the long-established Pushcart tradition, this fascinating collection combines the work of today's luminaries with a host of new talents, creating a deeply rewarding assembly of diverse voices. The most-honored literary series in America, The Pushcart Prize has been named a notable book of the year by the New York Times and hailed with Pushcart Press as "among the most influential in the development of the American book business" over the past century. The Pushcart Prize has been chosen for many Book-of-the-Month Club selections, and recently its editor was named small press "person of the year" by the Small Press Association.