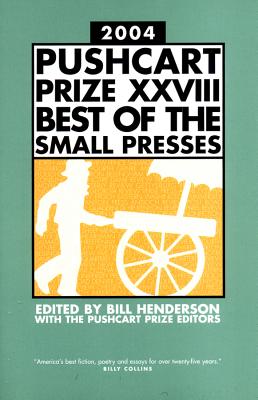 This is book number 28 in the The Pushcart Prize Anthologies series.

The Pushcart Prize XXVII continues as a testament to the flourishing of American literature in our small presses. Edited with the assistance of over 200 distinguished contributing editors—including Philip Levine, Rick Bass, Rosellen Brown, Joyce Carol Oates, Billy Collins, and Stephen Dunn—this edition includes over sixty stories, essays, and poems from scores of little magazines and small presses, both print and online. As the consolidation of commercial publishers continues, the small presses capture and encourage what is truly lasting and important in our literary culture. For new writers, the small presses are where they will almost always get their start. The Pushcart Prize serves as their inspiration and source book, with listings of hundreds of presses. Among writers discovered in the Pushcart editions are John Irving, Mary Gordon, Rick Moody, and many more.

Bill Henderson is the founder and editor of the Pushcart Prize. He received the 2006 National Book Critic Circle’s Lifetime Achievement Award and the Poets & Writers / Barnes & Noble Writers for Writers Award. He is also the author of several memoirs, including All My Dogs: A Life. The founder of the Lead Pencil Club, Henderson lives on Long Island and In Maine where he runs the Pushcart bookstore – “the world’s smallest bookstore.”
The ex-officio house organ for the American literary cosmos.
— Chicago Tribune

Indispensable for anyone with an interest in what is really going on in contemporary American writing.
— Frank Conroy

The most creative, the more generous, and the most democratic of any of the annual volumes.
— Rick Moody

This is the anthology that writers read.
— Russell Banks

I am fiercely loyal to and grateful for these editions.
— Wally Lamb