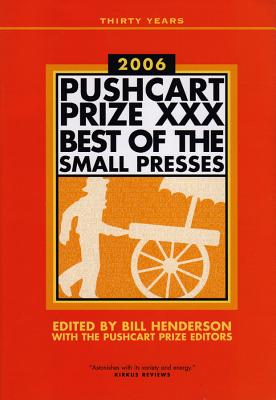 This is book number 30 in the The Pushcart Prize Anthologies series.

"[Henderson] has made it his mission over the last thirty-odd years to defy the dumbing down of literature and the culture at large." Kirkus Reviews

This edition of the long-honored anthology of small-press fiction, essays, and poetry marks its third decade, an amazing feat of survival and excellence. Like previous editions, The Pushcart Prize XXX presents over sixty selections picked from hundreds of little magazines and presses with the help of over 200 distinguished contributing editors. In the Pushcart tradition, this fascinating collection combines the work of today's luminaries with a host of new talents, creating an exciting assembly of diverse voices. Since 1976, The Pushcart Prize has been "the single best measure of the state of affairs in American literature today," according to the New York Times Book Review. Many of today's celebrated writers received their first recognition in The Pushcart Prize, which over the years has tracked small-press enthusiasms from traditional to experimental in an unsurpassed eclectic gathering.