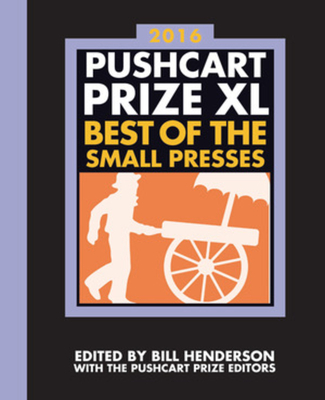 This is book number 40 in the The Pushcart Prize Anthologies series.

“This annual volume tops all others. The quality is exceptional; the diversity ditto.” - Publishers Weekly (starred review 2015 edition)

Edited with the assistance of over 200 distinguished Contributing Editors, including Poetry Editors Kim Addonizio and David Bottoms, Pushcart Prize XL celebrates 65 stories, essays and poems from dozens of little magazines and small presses. This 40th Anniversary Edition continues as a testament to the flourishing of American literature in our independent presses. As reviews of last year’s collection have indicated each edition of The Pushcart Prize has increased from strength to strength:Library Journal in a starred review commented, “A continuation of the series’ noble and classic tradition.”Donna Seaman noted in Booklist, “One of the zestiest and most impressive installments in Pushcart’s proud reign as the most bountiful and exciting of literary harvests.”From previous reviews: “The Pushcart Prize has become a literary institution…perhaps the single best measure of the state of affairs in American literature today.” - New York Times Book Review

More than 200 Contributing Editors and CO-Editors help select the annual volumes of The Pushcart Prize. The Pushcart Prize Editors come from almost every state in the USA and around the world. Every year more than 8,000 nominations are received for the Pushcart Prize.
Pushcart offers a clear and refreshingly panoramic view of the current state of creative writing. Essential reading, as always.
— Publishers Weekly