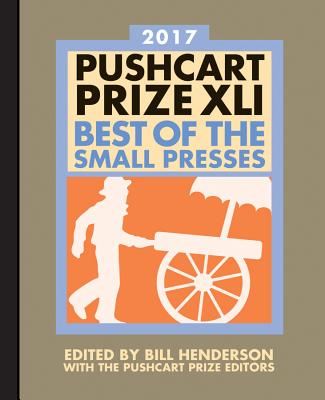 This is book number 41 in the The Pushcart Prize Anthologies series.

“Resounding testimony to the persistence of intelligent, creative, and compassionate expression” commented Booklist on last year’s Pushcart Prize. “A wonderful edition” said Publishers Weekly. Features appeared in The New York Times Book Review and elsewhere.Pushcart’s 41st Edition is edited with the assistance of 200 distinguished Contributing Editors and was selected from more than 8,000 stories, essays and poetry nominated by a complete roster of today’s outstanding non-commercial publishers.The Pushcart Prize has been honored with a Lifetime Achievement Award from The National Book Critics Circle, the Writers for Writers Award from Poets & Writers/Barnes & Noble and is acclaimed by readers and reviewers internationally.

More than 200 Contributing Editors and CO-Editors help select the annual volumes of The Pushcart Prize. The Pushcart Prize Editors come from almost every state in the USA and around the world. Every year more than 8,000 nominations are received for the Pushcart Prize.
Pushcart offers a clear and refreshingly panoramic view of the current state of creative writing. Essential reading, as always.
— Publishers Weekly