When The War Was Over: Cambodia And The Khmer Rouge Revolution, Revised Edition (Paperback) 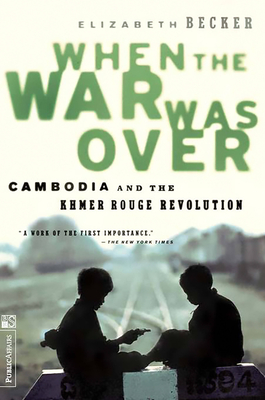 When The War Was Over: Cambodia And The Khmer Rouge Revolution, Revised Edition (Paperback)


Not On Our Shelves—Ships in 1-5 Days
Award-winning journalist Elizabeth Becker started covering Cambodia in 1973 for The Washington Post, when the country was perceived as little more than a footnote to the Vietnam War. Then, with the rise of the Khmer Rouge in 1975 came the closing of the border and a systematic reorganization of Cambodian society. Everyone was sent from the towns and cities to the countryside, where they were forced to labor endlessly in the fields. The intelligentsia were brutally exterminated, and torture, terror, and death became routine. Ultimately, almost two million people—nearly a quarter of the population—were killed in what was one of this century's worst crimes against humanity.When the War Was Over is Elizabeth Becker's masterful account of the Cambodian nightmare. Encompassing the era of French colonialism and the revival of Cambodian nationalism; 1950s Paris, where Khmer Rouge leader Pol Pot received his political education; the killing fields of Cambodia; government chambers in Washington, Paris, Moscow, Beijing, Hanoi, and Phnom Penh; and the death of Pol Pot in 1998; this is a book of epic vision and staggering power. Merging original historical research with the many voices of those who lived through the times and exclusive interviews with every Cambodian leader of the past quarter century, When the War Was Over illuminates the darkness of Cambodia with the intensity of a bolt of lightning.
Elizabeth Becker, previously a correspondent for The Washington Post, is currently a reporter covering the Pentagon for The New York Times.