Our Jimi: An Intimate Portrait of Jimi Hendrix through Interviews with Friends and Colleagues (Paperback) 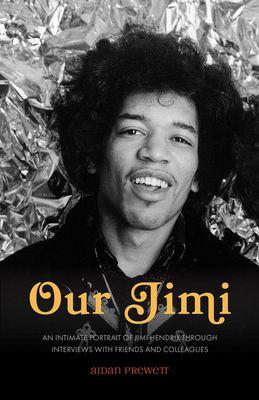 Our Jimi: An Intimate Portrait of Jimi Hendrix through Interviews with Friends and Colleagues (Paperback)

Personal moments with Jimi are recorded here in telling detail: You'll travel with Jimi Hendrix from his first moments at the Caf Wha to his last night in London. In the pages of this book you're given access to Jimi's inner circle. You'll sit next to Jimi on the plane to Monterey, jam with him in London and Greenwich Village - and join him on stage at Woodstock.

Many of these stories have never appeared in print or film before. There are surprises in store.

Jimi's friends reveal him as a genuine human being, quite separate from his stage persona. Joking around backstage and in the studio. Having Jimi over for Christmas dinner. Go-Karting with a grandmother in Majorca. These are moments that are often brushed over - but they allow us to delve deeper into Jimi's character.

This is as close as it gets to spending a few hours in the company of Jimi Hendrix.

Aidan Prewett is a documentary filmmaker and author with a focus on music and politics. His other books include To Know John Lennon and Woodstock at 50: Anatomy of a Revolution. Films include A Venue for the End of the World and The Trump Antidote.