To Know John Lennon: An Intimate Portrait from His Friends, Colleagues, and Family (Paperback) 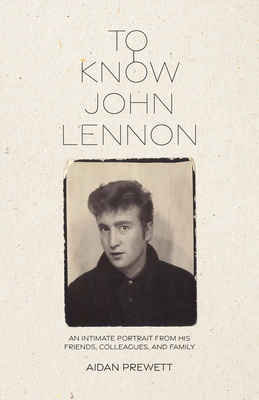 To Know John Lennon: An Intimate Portrait from His Friends, Colleagues, and Family (Paperback)

"Prewett has reinvented the rock biography through his immersive, entertaining interviews with key players...this is a triumph." -Plastic EP

Critically-acclaimed documentary filmmaker and author Aidan Prewett draws a portrait of the genuine Lennon - the generous, charming, and wickedly funny human being behind the icon - through incisive new interviews with John's closest friends, colleagues, and family.

Personal moments are recorded in telling detail: Rehearsing with the Quarrymen in Lennon's mother's bathroom. Taking a stroll around the block at 3am in New York City. Singing old rock 'n' roll hits in the back of a limousine. And spending the night in a London train yard in 1965.

Travel with John through his school days and career with the Beatles - to his solo career and life in New York, up to his last recording session.

This is as close as it gets to spending a few hours in the company of John Lennon.

Aidan Prewett is a documentary filmmaker and author with a focus on music and politics. His books include To Know John Lennon, Our Jimi, ?and Woodstock at 50: Anatomy of a Revolution. Prewett's films often feature a strong music focus, from the historical Me and the Devil Blues, about the legendary Robert Johnson, to the '60s rock/politics documentary?A Venue for the End of the World?and the?aural addiction of?Me, Myself & iPod.?His non-music documentaries include?Selected Works of Uncle Neill?and most recently?The Trump Antidote. Prewett's films have been shot on location across the globe and feature a host of entertainment luminaries. Find his films at http: //www.brinkvision.com/ @devilbluefilms