Just a Little Later with Eevo and Sim (Paperback) 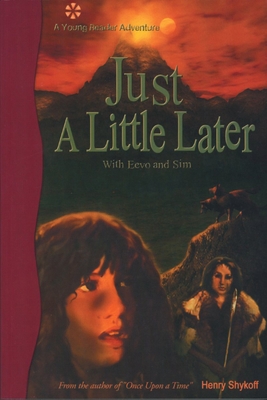 Just a Little Later with Eevo and Sim (Paperback)

Just a Little Later With Eevo and Sim is the continuation of Once Upon a Time Long, Long Ago, the adventures of Eevo and Sim. The story is set about 50,000 years ago in the time of prehistoric man. Their parents, Shim and Dedu, have just returned from their long trip to the Wetlands Clan, the former home of Shim. They discover that, together, Eevo and Sim had overcome many dangers, discovered fire, rescued two wolf cubs and saved their home from starvation.

Now Sim and Eevo are off on a long, dangerous journey back to the Wetlands Clan, accompanied by the wolves. Caught in a fierce sandstorm, they are separated from Shim and Dedu. Once again, this sister and brother take on many challenges, make new discoveries, and even encounter the Great One: the much-feared crocodile of the Great River.

Once Upon a Time Long, Long Ago was an incredibly popular book in my school library. The continuing tale, Just a Little Later With Eevo and Sim, proves to be an equally exciting story. Students from grades 3 to 8 will be enthralled by the adventures these two siblings encounter. From designing water bags made from an elk's stomach to figuring out a way to capture a gigantic crocodile; from teaching the secret of fire making to planning how to hunt wild horses, Sim and Eevo prove how valuable they are to the clan. Both children make wonderful role models for all young people.

Henry Shykoff's family came to Canada from Poland when Henry was six years old. He grew up in Toronto and graduated from the University of Toronto medical school in 1949. Anaesthesia was his chosen profession and he enjoyed forty years of a distinguished medical career, which included teaching and research. After retiring from the hospital, he pursued his love of storytelling and the study of paleoanthropology. His first book, Once Upon a Time Long, Long Ago, was enthusiastically acclaimed by young readers. It was a Silver Birch nominee. Henry lives in East York with his wife, Ruth. They are the proud parents of three daughters and the happy grandparents of four grandchildren. Now in his eighties, Henry is working on his third book about Eevo and Sim.