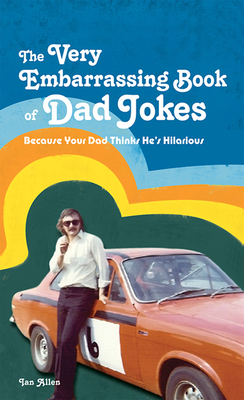 
Not On Our Shelves—Ships in 1-5 Days
A collection of "side-splitting" jokes collected from dads around the world, all of whom think they are hilarious Why did the banana go to the doctors? Because he wasn't peeling very well!

Proving the age-old maxim that "it's in the way that you tell them," dads have always been renowned for being truly godawful joke tellers. Whether it's telling them at the wrong moment, misremembering the punchline, or it just simply being a terrible joke to begin with, dads are an embarrassment to the whole family when it comes to trying to be funny. This collection is full to the brim with jokes that only dad would dare tell—jokes that will make you groan, sigh, and then probably groan again. Dads take great pleasure in these kinds of jokes and some of them are so terrible they blossom into actual ribticklers—but don't tell your dad that, it will only encourage him.

Ian Allen is a father of three teenagers and a funny man indeed. He has worked on several joke books.
"Not only provide[s] amusement, but might also be [a] conversation starter."  —Daily Loaf