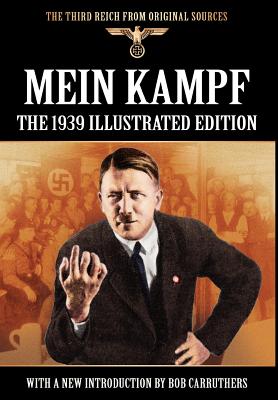 
Not On Our Shelves—Ships in 1-5 Days
(This book cannot be returned.)
"The great masses of the people will more easily fall victim to a big lie than to a small one." Adolf Hitler The only edition of Mein Kampf officially sanctioned by the Nazi Foreign Office in the English language was the edition translated and introduced by James Murphy. The illustrated edition using his translation was first published in the UK in 1939 in 22 weekly parts by Hutchison and Co Ltd. This authentic edition brings together that entire series complete with Murphy's 1939 introduction and a new introduction by Emmy AwardTM winning historian Bob Carruthers, and includes over 250 photographs. Murphy's was the only translation which was officially endorsed by the Nazi party during Hitler's lifetime and as such represents an opportunity to approach the work as it was presented to contemporary readers. This was the version of 'Mein Kampf' which the Nazi party hoped would spread the gospel of National Socialism throughout the UK, but by the time publication was underway World War II had commenced. Somewhat surprisingly, publication of the weekly illustrated edition was allowed to continue although all proceeds from the sale were diverted to the British Red Cross. This new publication of the entire primary source provides the reader with access to the complete historical document and provides a unique insight into the past by reproducing 'Mein Kampf' as it was presented to British readers in the thirties.