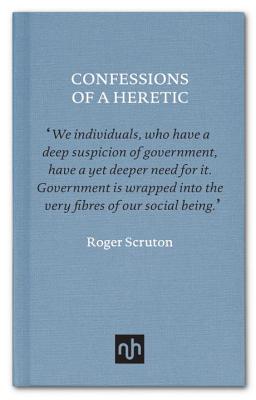 A wide-ranging selection that includes essays on architecture and modern art, the environment, politics, and culture.

Each “confession” reveals aspects of the author’s thinking that his critics would probably have advised him to keep to himself. Roger Scruton challenges popular opinion on key aspects of our society: What can we do to protect Western values against Islamic extremism? How can we nurture real friendship in the digital age of social media and Facebook? How should we achieve a timely death against the advances of modern medicine? How should environmental policies be shaped by the government? This provocative collection seeks to answer the most pressing problems of our age.
Roger Scruton is a philosopher, public commentator, broadcaster, and the author of more than forty books, including Notes from Underground, The Disappeared, and Fools, Frauds and Firebrands: Thinkers of the New Left. He has specialized in aesthetics with particular attention to music and architecture, engages in contemporary political and cultural debates from the standpoint of a conservative thinker, and is well known as a powerful polemicist. Scruton is a fellow of the Royal Society of Literature and the British Academy, and a senior fellow at the Ethics and Public Policy Center in Washington, D.C.
“Roger Scruton is that rarest of things: a first-rate philosopher who actually has a philosophy...one of the few intellectually authoritative voices in modern British conservatism.” —Jesse Norman, The Spectator

“Scruton is brilliant at the patient demolition, in sorrowful yet witty tones, of wobbly conceptual edifices.” —Steven Poole, The Guardian