Route 66 Then and Now® (Hardcover) 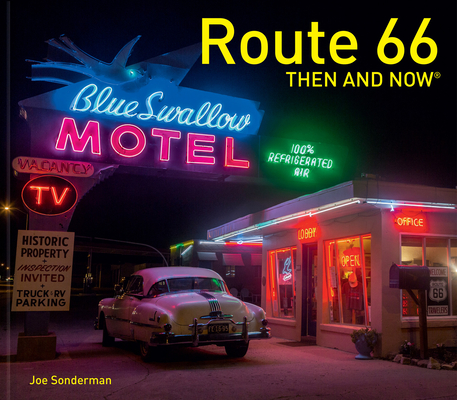 Route 66 Then and Now® (Hardcover)


Special Order—Subject to Availability
The ‘Mother Road’ or the ‘Will Rogers Highway’ has been open since 1926. Its heyday was the WWII and post-war era and many roadside structures sprang up to cater for the "tin-can tourists" making the journey from East to West. Gas stations, motels, and diners all had to compete for business and what better way to attract attention than with a wacky feature such as a wigwam motel, an iceberg cafe, or a whale-themed diner.Route 66 Then and Now revisits some of these bizarre (and not-so-bizarre) structures to see what’s left before time takes its toll. Some, such as the Magnolia Service Station in Kansas, have been preserved on the National Historic Register; others, such as the Aztec Motel in Albuquerque, are still doing a thriving business; while others have simpy vanished from the landscape.Starting in Chicago, Route 66 Then and Now takes in the motels, cafes, gas stations, roadside attractions and key towns and sites along the route. From the Blue Whale in Catoosa, past Angel Delgadillo’s store in Seligman, Arizona, to the end point in Santa Monica, Route 66 historian Joe Sonderman takes readers on the 2,500-mile trip, illustrated by his fabulous postcard collection.Includes: Illinois: Chicago, Joliet, Dwight, Pontiac, Logan County. Missouri: St. Louis, Lebanon, Springfield, Joplin. Kansas: Galena, Baxter Springs. Oklahoma: Catoosa, Tulsa, Sayre. Texas:Shamrock, Amarillo, Glenrio. New Mexico: Santo Domingo, Gravel Hill, Albuquerque. Arizona: Holbrook, Winslow, Two Guns, Flagstaff, Seligman, Kingman. California: Needles, Amboy, Barstow, Cajon Pass, San Bernadino, Pasadena, Santa Monica.
Joe Sonderman is a prolific Route 66 author and has one of the most extensive collections of Route 66 postcards in the USA. He has written 13 books on the Mother Road, including Route 66 in Illinois, Missouri, St. Louis, Oklahoma, Kansas, New Mexico, Texas, and Arizona.