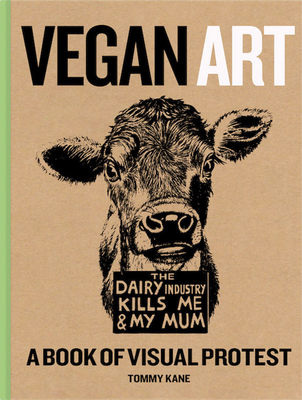 In this volume, the celebrated American illustrator Tommy Kane brings together a collection of contemporary vegan artists whose works grapple with one of the biggest issues of our century and confront our conflicted relationship with animals.

With diverse contributions, Vegan Art combines a passion for art as a language with the rebellion against animal abuse and exploitation, with the belief that art should be a mechanism for social change. The iconography of the book is purposefully graphic and controversial. From utopian depictions of a world that vegans are fighting for, to dark dystopian impressions and brutal, bloody mutilations of nonhuman animals in industrial agriculture, the project tests the potential of our humanity and asks for equality for all species. Including violent imagery and references to major food corporations such as McDonald's, the project is unflinching in its advocacy of veganism and animal rights. Vegan Art engenders a sense of humility with a shared view that art has the power to move people to be informed consumers. Artists include: Tommy Kane, Helen Barker, Melina Hegedus, Philip McCulloch-Downs, Rob MacInnis, Milk DoNg Comics, Dan Piraro, Sue Coe, Jane Lewis, Hartmut Kiewert, Jo-Anne McArthur, Tommy Flynn, Caroletta, Chantal Poulin Durocher, Andrew Tilsley, Jo Frederiks, Cameron O'Steen, Dana Ellyn, Roland Straller, Cynical Coyote, Kate Louise Powell