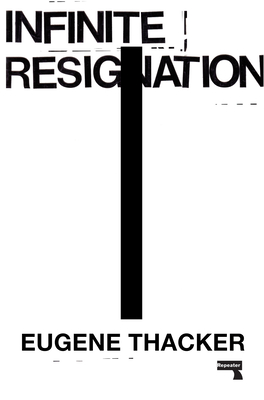 
Not On Our Shelves—Ships in 1-5 Days
“Scholarly advice for dark times.”
The New Yorker

“Provides a metric ton of misery and a lot of company.”
The New York Times

Dark times lie around us and ahead of us, and what better way to survive the coming Apocolypse than by immersing yourself in some of the greatest thinkers on pessimism, brought together with his own thoughts on the subject by Eugene Thacker, author of the contemporary classic, In the Dust of This Planet.

Comprised of aphorisms, fragments, and observations both philosophical and personal, Thacker’s new book traces the contours of pessimism, caught as it often is between a philosophical position and a bad attitude. Reflecting on the universe’s “looming abyss of indifference,” Thacker explores the pessimism of a range of philosophers, from the well-known (Nietzsche, Schopenhauer, Camus), to the lesser-known (E.M. Cioran, Lev Shestov, Miguel de Unamuno). Readers will find food for thought in Thacker’s handling of a range of themes in Christianity and Buddhism, as well as his engagement with literary figures (from Dostoevsky to Thomas Bernhard, Osamu Dazai, and Fernando Pessoa), whose pessimism about the world both inspires and depresses Thacker. By turns melancholic, misanthropic, and darkly funny, (“Birth is a metaphysical injury — healing takes time — the span of one's life”), many will find Infinite Resignation a welcome antidote to the exuberant imbecility of our times.
Eugene Thacker is the author of several books, including In the Dust of This Planet. He is Professor at The New School in New York City.
"Scholarly advice for dark times."


"Provides a metric ton of misery and a lot of company."


"Belongs on the shelf next to the likes of Nietzsche and Schopenhauer... Thacker’s voice is quiet, a desperate whisper into the void that is both haunting and heartbreaking."


"When life gives us lemons, Thacker refuses to make lemonade. Rather he adds lemon juice to the ink pot, and proceeds to write with an acerbic clarity - and touches of black humor - about the predicament of being human."